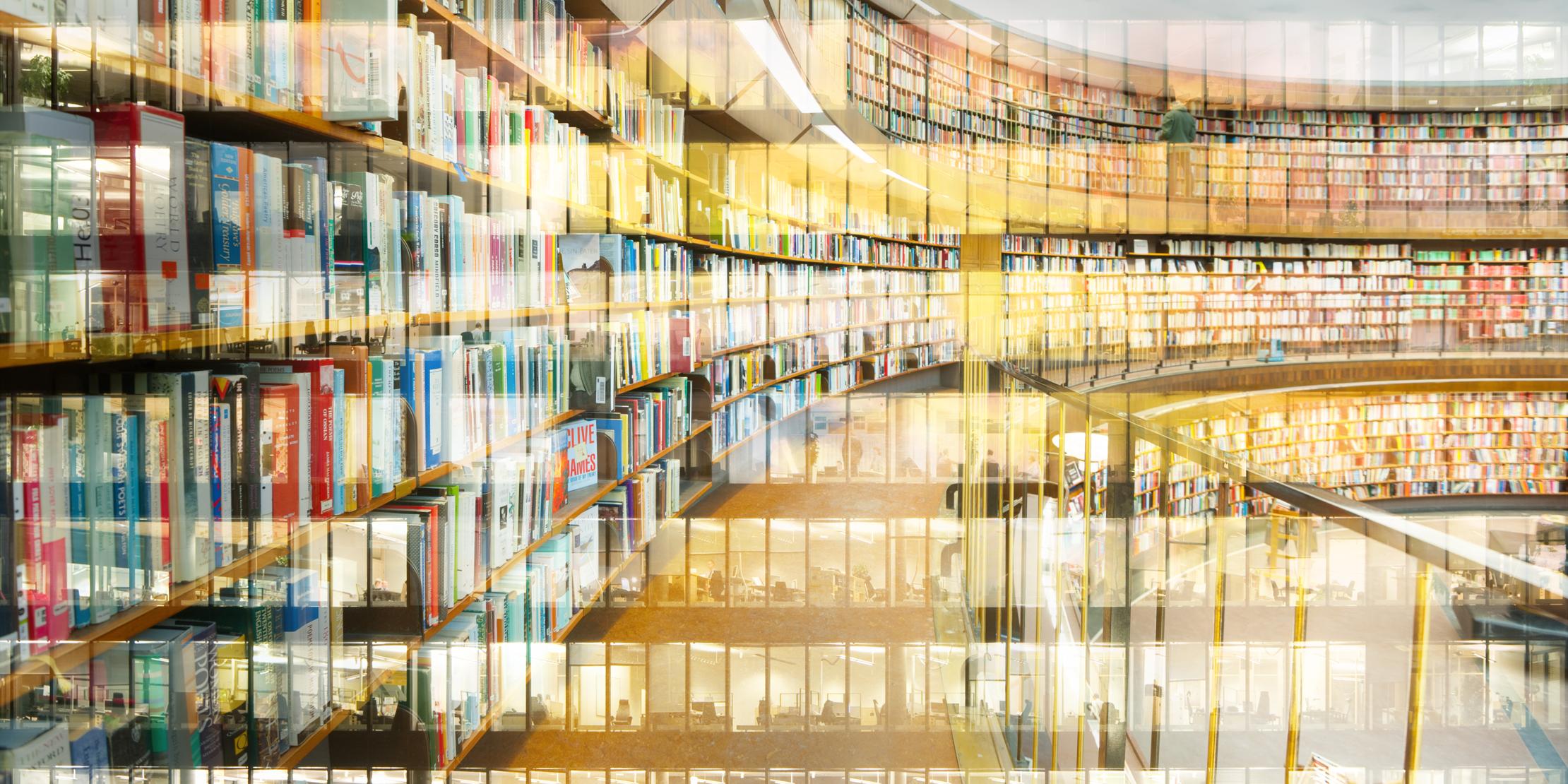 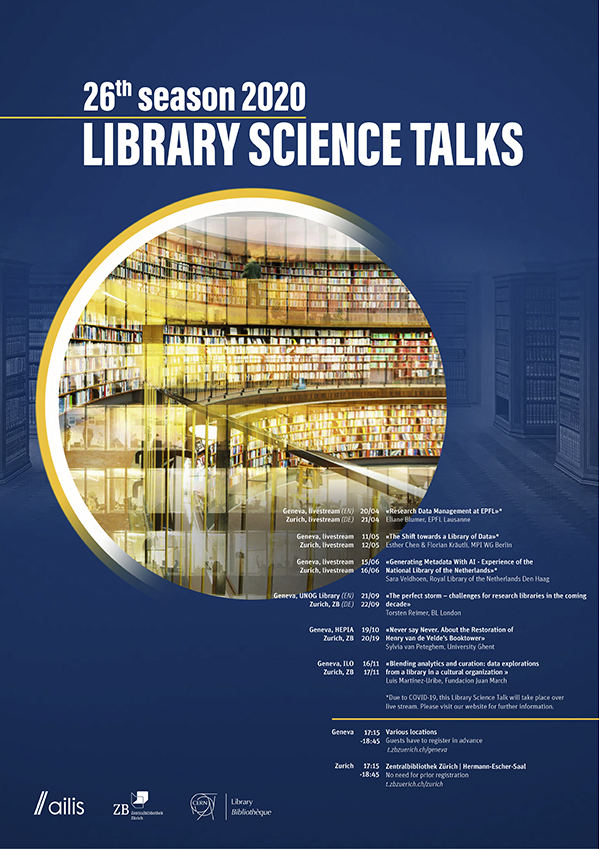 The story of the Booktower starts in the 1930s when Henry van de Velde was asked to build a University Library and offices for the department of Art history for Ghent University. His tower-idea was not exactly what the chief librarian had in mind, so he had to (net)work hard to get the building he wanted. It was finished on the verge of the second world war. The concrete building has a height of 64 meter, has 24 floors and a “belvedere” and houses almost 3 million books in closed racks.

The university did not neglect the tower during all these years, but was not always aware of the historical value and often choose the cheapest way for building matters. A couple of years ago André Singer, a private person bought the Van de Velde archive of the Booktower (which was in private hands), got fascinated with the building, got angry because of lack of care and networked (maybe as hard as Van de Velde once did to get it built) to get it restored. The board of directors of the university said yes to the restoration in September 2005. It should have been finished in 2015, 2016, 2017, 2018, 2019, 2020 and now in 2025 it maybe will.

I think you will be as stunned as I was a couple of years ago when you will see how much inspiration Van de Velde brought with him from Switzerland. You will recognize parts of one of your main libraries in his beautiful Booktower. A swiss touch to a Ghent building!

At the KB, national library of the Netherlands, we have been experimenting with automated tools to improve bibliographical metadata processes. So far, we have focused on subject headings (from a controlled thesaurus) and author attribution (matching with authority files), tasks that require a lot of manual work from our cataloguing department. We're developing a web application that empowers the workers by filtering out irrelevant information and present substantiated suggestions.

The Shift towards a Library of Data

For many centuries, solid units of texts were the center around which libraries commonly worked and evolved. Scholarly texts developed certain formats and were published within certain workflows, both of which remained stable over a long period of time. Responsibilities within the system of scholarly publication, dissemination, and archiving were clearly distributed between scholars, publishers, and librarians.

Over recent decades, and under the growing influence of digitization, we watch this system dissolve. Libraries are currently mid-way through a long phase of transition: this transition affects nearly all library-related fields of work, and can be described from different perspectives. One main aspect is the shift towards and the consequences of a diversification in the formats of scholarly outputs, which has invited librarians to take up new responsibilities and to broaden their expertise while transforming their libraries into libraries of data. The role of librarians within the research process is therefore changing, with new services developing in response to scholarly needs and new technical systems requiring implementation.

In our talk we will describe practical approaches, experiences, and progress made in our research library at the Max Planck Institute for the History of Science in recent years.

A Step in the Evolution of a Library: The Knowledge & Learning Commons of the United Nations Geneva

Located in a wing of the famous Palais des Nations, a neo-classical and art-deco building of the 1930s dedicated to peace through diplomacy, the Library of the United Nations Geneva serves diplomats, conference delegates and thousands of researchers around the world every year.
In 2019, the Library launched the Knowledge & Learning Commons for UN Geneva in its building. The initiative leverages existing spaces, information resources and learning and event management capacities and networks to encourage diplomats and staff to innovate, collaborate and co-create on topics relevant to professionals in the area of multilateralism.
This presentation will give you an insight into the concept of a library commons, the path of implementation taken at the United Nations Geneva, and the opportunities and outcomes that it can generate.

Sigrun Habermann is head of the Library Services Section of the United Nations Library Geneva, where she oversees knowledge services provided online and in person to UN staff, diplomats, and researchers from outside the organization. She also manages the Library’s flagship discussion series “Library Talks” and participates in developing and leading the “Knowledge & Learning Commons” initiative.
In previous positions, Habermann managed the League of Nations and United Nations Archives and records management service and worked in various public and academic libraries, as well as in documentation centers in Germany and the United States.
She holds a Master of Science in International Relations from Troy State University, North Carolina branch, a master’s degree in Library and Information Science from the State University of New York, Albany, which she accomplished on a Fulbright scholarship, and a bachelor’s degree in information science from Hochschule der Medien, Stuttgart, Germany.

From Demat to Remat: Designing the post-digital library

Like many, the Library of the Natural History Museum in Paris has invested in the acquisition of electronic documentation and the digitization of its holdings over the past 20 years in order to match researchers’ expectations and keep up with the massive dematerialization of scientific publications and data in the field of natural sciences. And it has been quite successful indeed, since researchers barely use the physical library anymore. What should we do now with our empty seats, reading rooms and reference staff? Should we close the Library or try to think differently about its mission and services? Designing the post-digital library and revisiting the potential of its materiality is not about going backwards. The digital experience and the dematerialization of cultural transactions has impacted our users’ lives in many ways. There are things people are starting to miss, senses that need to be reactivated. What if the library could be a good place to start addressing this sense of loss and look at the physical and social experience of a reading room or the discovery and manipulation of original, heritage collections as legitimate services of their own?

Located in between green houses, exhibition galleries, a botanical garden and a zoo, the Museum’s Library keeps exceptional collections including archives, manuscripts, sculptures, drawings, photographs, scientific instruments and even dead and living animals and plants - all stored in the stacks and backstage. The caretakers of this hidden treasure are also incredible storytellers. Our vision is that the future of the Library may somehow lie behind this scene, in the emotional and material strength and inspiration of this heritage and the passion of the people in charge of their conservation. Making the library “hyper-material” again may be our chance and our next challenge. This presentation will develop the vision of a post-digital library focused on human experience and tell the story of how its team has successfully engaged major organizational changes in order to start experimenting new forms of mediation and reach a totally new public.

The opening of the Helsinki Central Library Oodi in December 2018 was a grand event in whole Finland, gathering 55 000 people to the library during two days. More success followed, the first million of visitors was broken at the end of March 2019. The same pace is still continuing.
Very attractive to our Mayor and other politicians is the fact that Oodi brings a lot of good reputation to Helsinki. Only in 2018, the calculatory media coverage was worth of nearly 11 million euros.
This popularity is a result of decisive and ambitious planning. I would argue that this is in the air – Helsinki is not the only city building a big central library: Aarhus, Oslo, Gent... These open buildings are an answer to a clear need in the society. In practice, the success consisted of participation of citizens, quality architecture, systematic PR work and political understanding, which was greatly pushed by the covering support from citizens.
We planned a library with citizens, not for citizens. Now they really feel ownership of the library.

Tuula Haavisto is the Cultural Director of the City of Helsinki, Finland. From March 2013 to the end of July 2017, she served as the Library Director in Helsinki. Before that, she worked in the Tampere City Library in the same role. 1997-2006 Haavisto run her own consultancy ‘Tuula Haavisto Library Knowledge T:mi’, working on domestic and international projects, training and development. On 1987-97 she was the Secretary General of the Finnish Library Association. Before that period, she had librarian and researcher posts in the Ministry of Environment, Academy of Finland and others.
Ms Haavisto is Master of Social Sciences from Tampere University (1983). She has had numerous positions in professional organisations, given articles and lectures and run other activities in Finland and abroad during her career. At the moment she is Chair of the Steering Group of Data Management of the National Library of Finland.