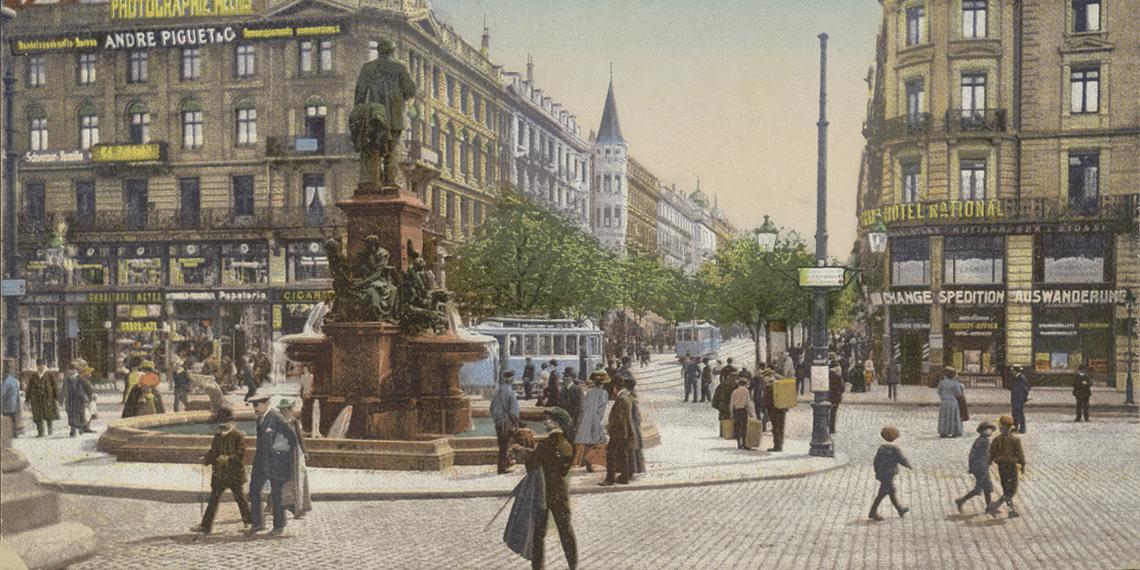 In his day, the controversial Zurich politician, railway pioneer and bank founder was so powerful that people referred to the “Escher system”. Delve back into Zurich’s past and explore fascinating documents by and about Alfred Escher. 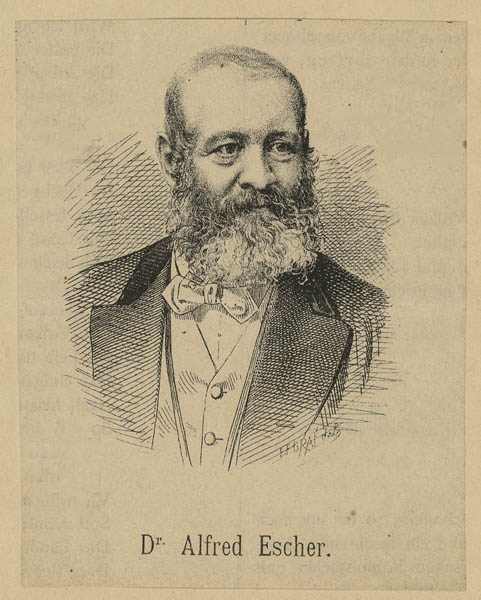 Alfred Escher and his times

Alfred Escher was born in Zurich on 20 February 1819. The Escher zum Glas family was one of the leading dynasties in the old city. Alfred’s father, Heinrich Escher, amassed a fortune through land speculation and trading activities in the US. Returning to Zurich, he commissioned the building of the Villa Belvoir, where he lived as a gentleman of means. 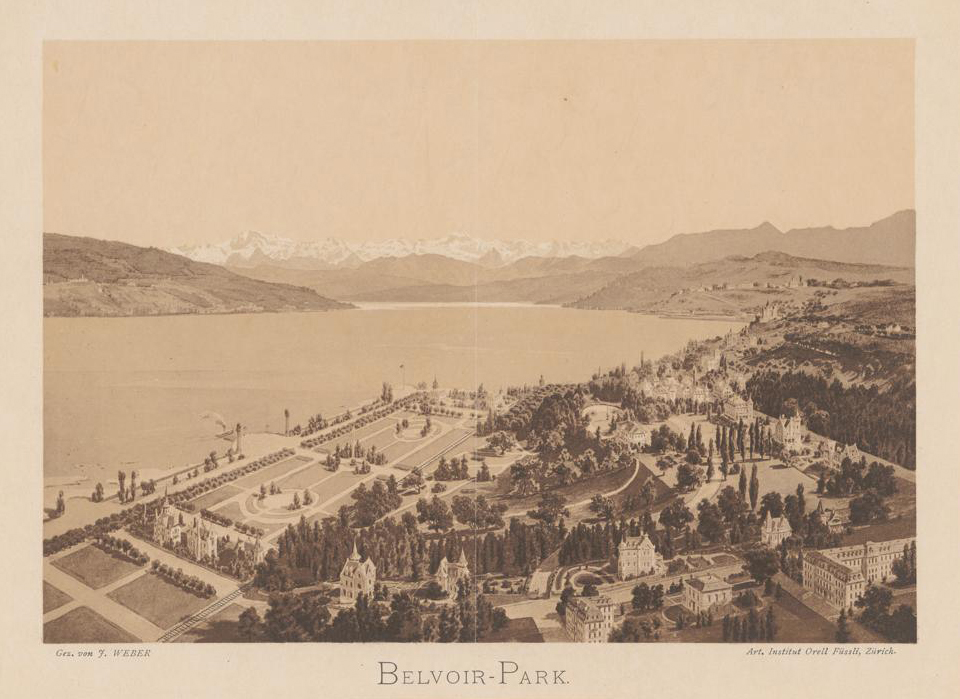 It was in this sheltered environment that Heinrich’s children Clementine and Alfred Escher grew up – as, later, did their daughter Lydia. Alfred Escher passed his school-leaving exam at the cantonal grammar school in 1837 and went on to read law at the University of Zurich. While studying in Bonn, Berlin and Paris, he became committed to the liberal cause. He received the highest grade for his dissertation. Escher called for the establishment of an independent university and made public statements attacking the clergy. The “Züriputsch” of 1839 ultimately prompted a resurgence of the reactionary conservative elite, much to Escher’s displeasure.

Our Department of Prints and Drawings and Photo Archive includes a number of portraits and photos of Alfred Escher and his family. Many can be consulted online and downloaded. In 1844, the radical liberal lawyer Jonas Furrer from Winterthur persuaded the 25-year-old Alfred Escher to stand for election to the Grand Council. It was the beginning of Escher’s career. The people of Zurich were soon calling him “King Alfred I”. He assiduously accumulated official positions, founded companies such as the “Schweizerische Kreditanstalt (SKA)” bank, and promoted the development of the ETH and the expansion of the railways. Above all, though, he cultivated a powerful network of influence that enabled him to combine economic and political goals. The “Escher system” made him one of the most influential men of his time, engineering Zurich’s economic ascendancy and leading Switzerland into the modern era.

You can find out more about Alfred Escher’s role in building the railways in the documentary “Gotthardtunnel – Das Jahrhundertwerk” in the SRF DOK series. 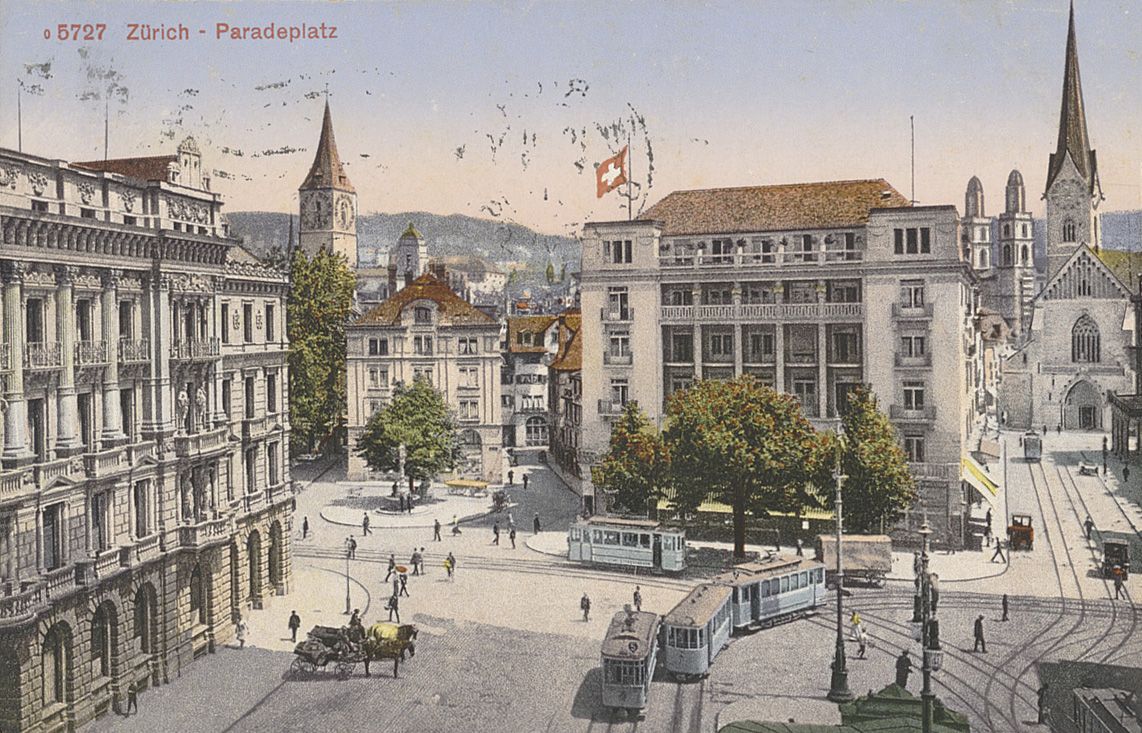 Soon, the new liberal elite of finance and industry came to resemble the supposedly defunct Ancien Régime. There was growing criticism of the “Escher system”. After the democrats’ election victory in Zurich and the approval of a cantonal constitution by voters in 1869, the “Escher system” came to an end. Escher continued to play a major role in the construction of the Gotthard railway. Problems financing the project ultimately led to a rift with Federal Councillor Emil Welti, who called on him to step down as chairman. This was the lowest point of his career. He was not invited to the tunnel breakthrough in 1880 and his name was not even mentioned. He did receive an invitation to the opening of the Gotthard railway in 1882, but by this stage he was already terminally ill. Alfred Escher died six months later, on 6 December.

The documentary “Aufstieg und Fall des Schweizer Wirtschaftspioniers” in the SRF DOK series offers an insight into an age when Switzerland was evolving from an agricultural into an industrial nation. It was also an era of profound social upheaval. 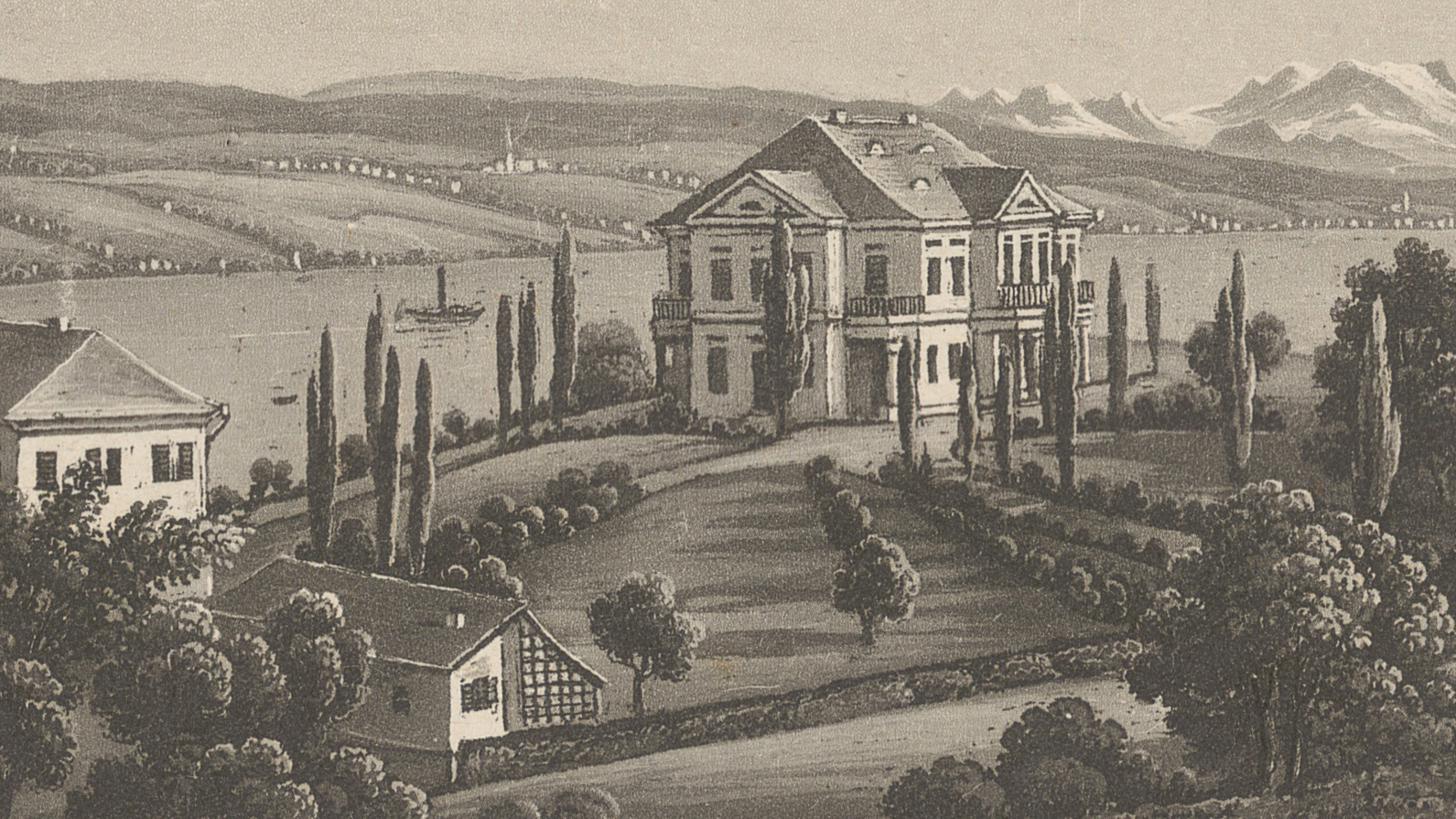 Birth, family move to the Belvoir

Born on 20 February 1819 in the “Kleiner Neuberg” on Hirschengraben in Zurich. His father Heinrich Escher is a merchant and insect collector. His mother, Lydia Zollikofer von Altenklingen, hails from a long-established family of St. Gallen merchants.

In 1831 the Escher family moves into the stately Villa Belvoir in the commune of Enge, now part of the city of Zurich. Here, Alfred Escher and his sister receive private tuition. Their father wants to prevent them from being exposed to influences beyond his control. Alfred is mainly given lessons in Latin, Greek, mathematics, geography and natural history. A frail and sickly child, he is also taught gymnastics. 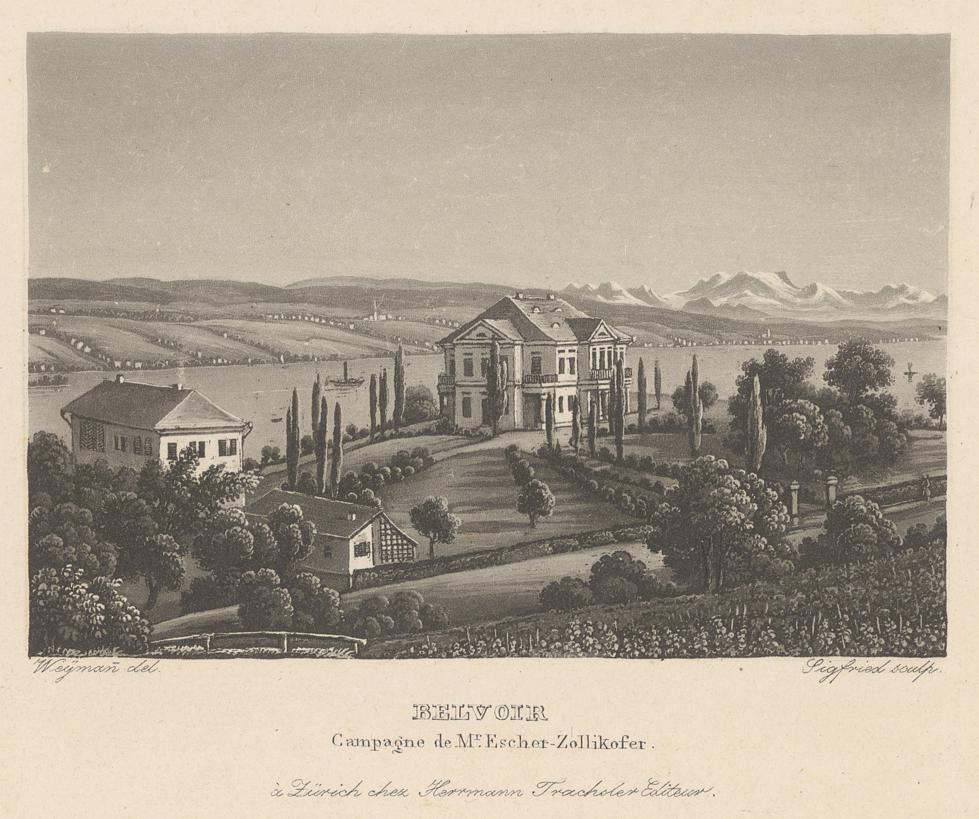 The Belvoir Park in a print from around 1835.
ZB Department of Prints and Drawings, call number: Zürich 2.1, Belvoir I, 1 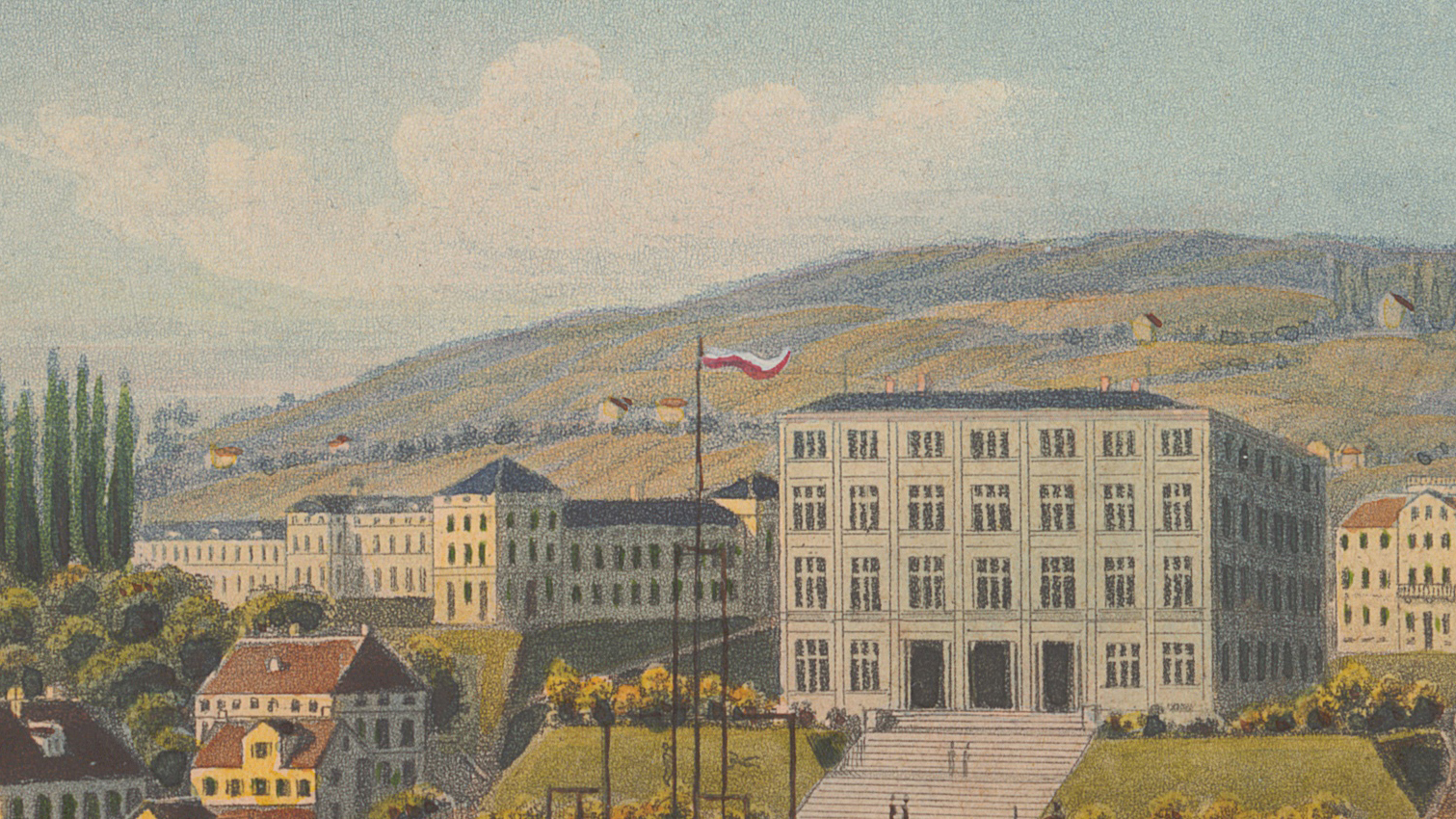 From 1834 to 1837 Alfred Escher attends the newly established cantonal school, where he passes the school leaving exam. His main interest is in the natural sciences. For the first time, the youthful Alfred is active in a class association. He sets up a literary club, reading circle and natural science circle. 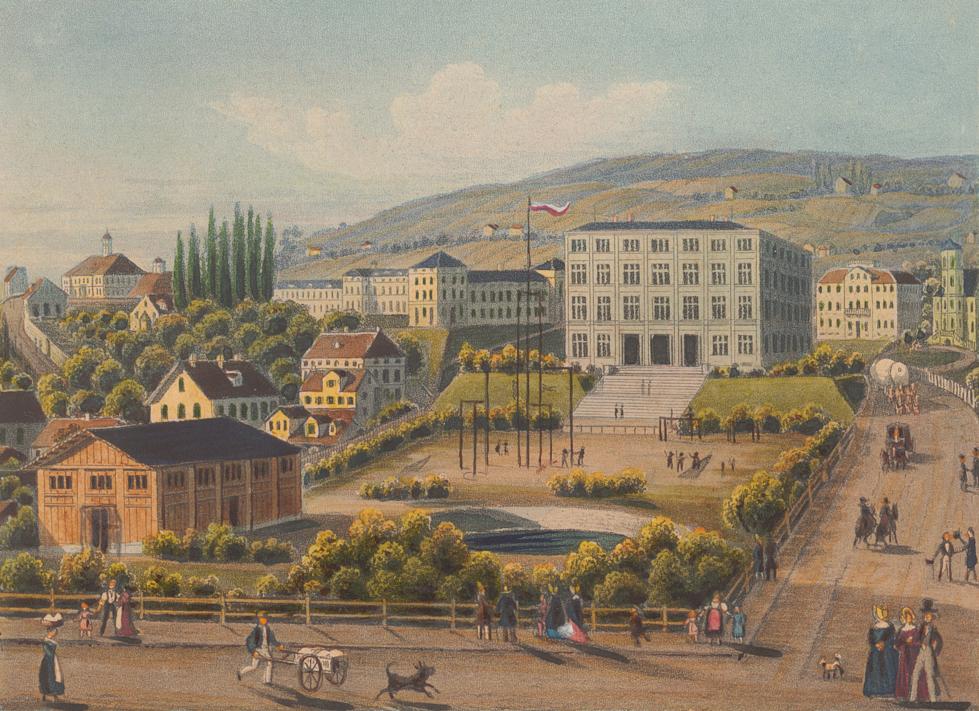 The cantonal school building (now part of the University of Zurich) in a coloured aquatint from around 1860.
ZB Department of Prints and Drawings, call number: Zürich G1, Universitäts-Qu., Kantonsschule I, 7 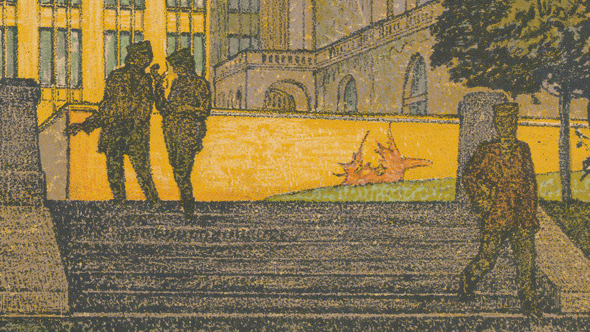 From 1837 to 1842 Alfred Escher studies law at the University of Zurich, founded four years previously. During his studies he embarks on a semester abroad in Bonn and Berlin, but is obliged to cut it short owing to a serious illness.

While at university, Escher is a member of the student fraternity Zofingia, and serves as its overall president from 1840 to 1841. The liberally minded Zofingia is one of the three big student fraternities in Switzerland at the time. It exerts a great influence on the development of Escher’s personality and his views on national politics.

As a student, Escher is a regular at the Café Baur (now Ristorante Orsini), where Gottfried Keller is also often to be found.

Alfred Escher obtains his doctorate in 1842 with a dissertation entitled “De testium ratione quae Romae Ciceronis aetate obtuinit”. He then spends half a year in Paris, attending lectures and forging political plans. 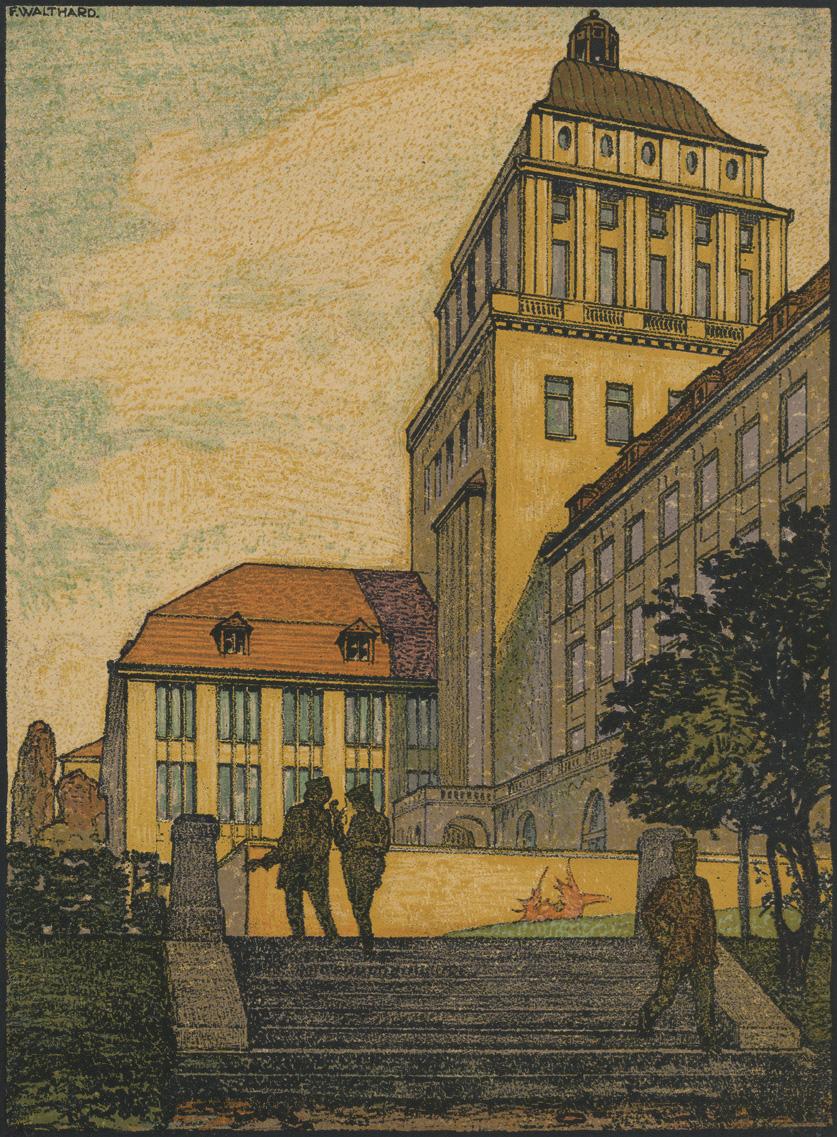 The main building of the University of Zurich in a 1915 print by F. Walthard.
ZB Department of Prints and Drawings, call number: Zürich, Universität I, 15 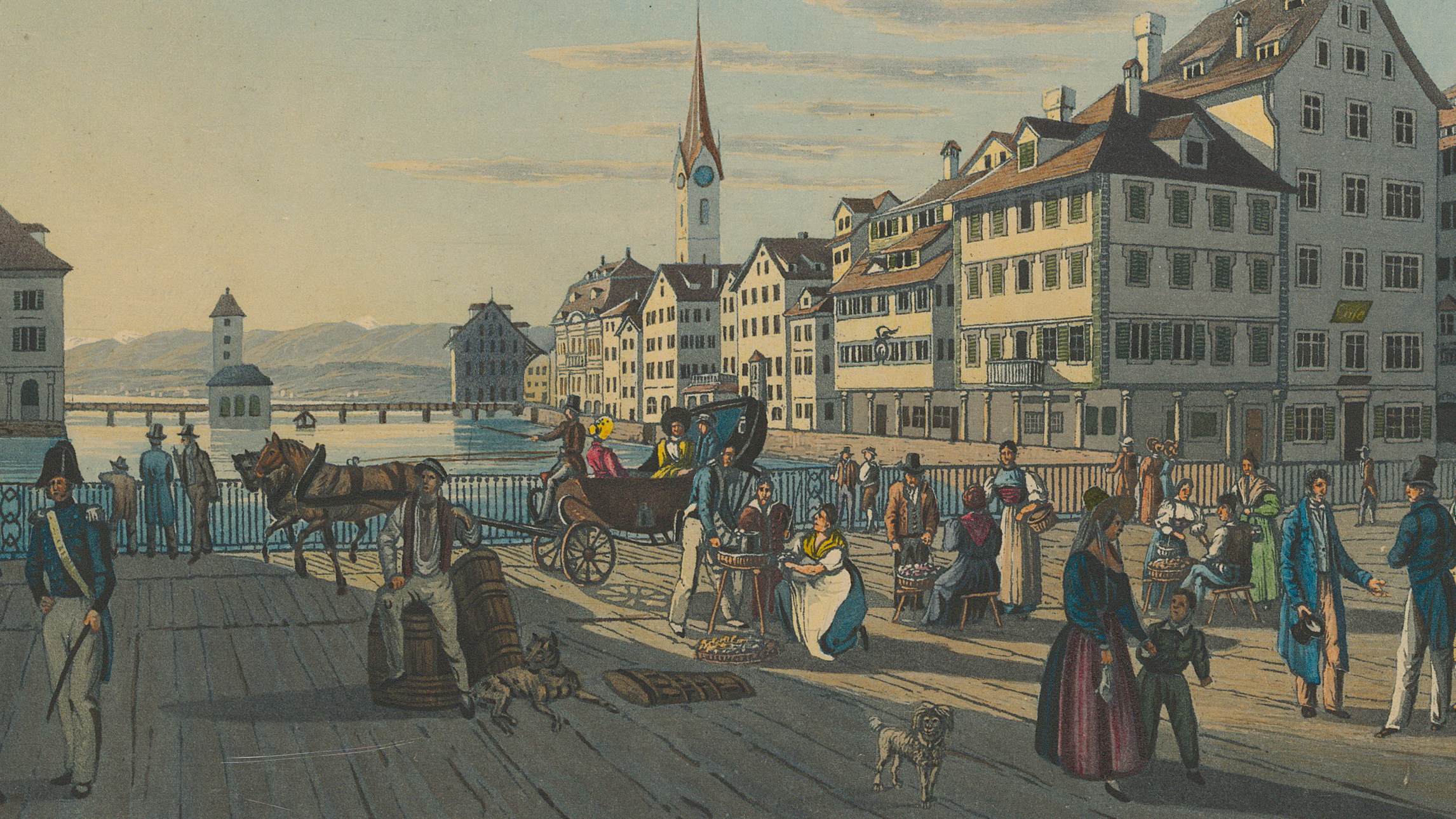 From 1844 to 1847 Escher gives private lectures on German, French and Swiss law at the University of Zurich.

In 1844 Escher becomes a member of Zurich’s cantonal council (Grand Council). He is even its president on a number of occasions, retaining his seat until his death.

From 29 June 1847 to the end of 1848 Escher is First Official Secretary [GS1] of the Canton of Zurich. Gottfried Keller serves under him as an unsalaried clerk in the Zurich Cantonal Chancellery.

From 26 June 1848 to 1855, Escher is a member of Zurich’s cantonal government, serving for four years as its president.

On 15 October 1848 Escher becomes a member of the first National Council. He remains on the Council until his death, serving a number of terms as President.

During the 1840s, Escher gathers with other up-and-coming young liberals, including Gottfried Keller, for their Wednesday meeting in the Café Littéraire. 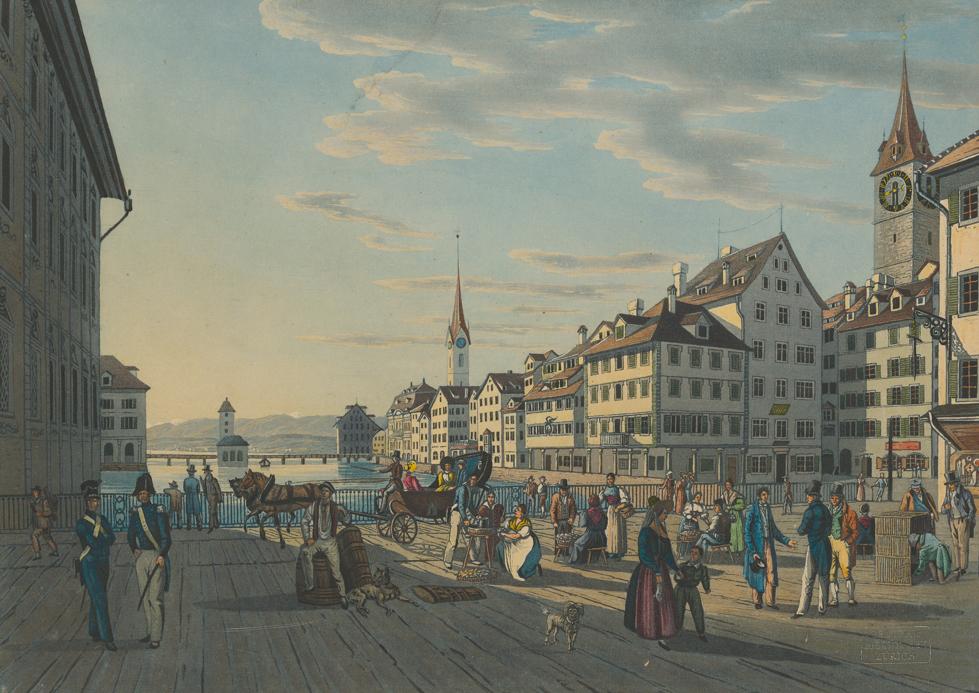 Weinplatz with a view of the Rathausbrücke on a coloured aquatint by Johannes Ruf from around 1835; one façade of the town hall (far left) and the Red Tower (the tall gabled house to the right) along with the Café Littéraire can easily be made out.
ZB Department of Prints and Drawings, call number: Zürich, Weinplatz I 8 Pp A4 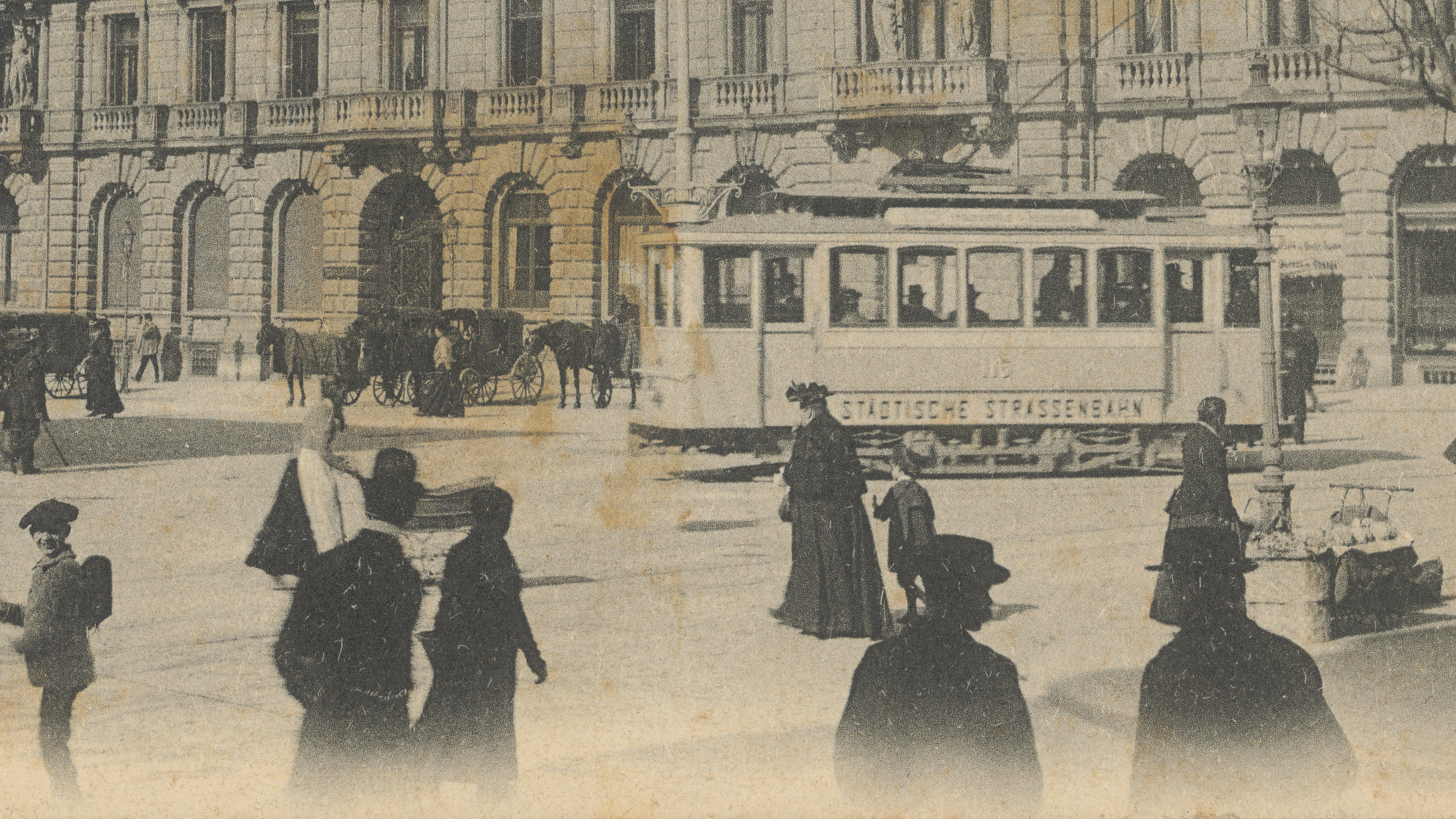 Chairman of the Swiss North-Eastern Railway

On 12 September 1853 Escher is appointed Chairman of the Swiss North-Eastern Railway.

The previous year he has campaigned at federal level for the Railway Act. He entrusts the construction and operation of the railways to private companies, and grants the cantons the concession to issue the rail franchises.

On 2 August 1854 he becomes Vice-President of the Federal School Council, the governing body of the Polytechnic Institute (now the ETH Zurich).

From 1856 to 1877 Alfred Escher is Chairman of the Board of the Schweizerische Kreditanstalt (SKA), the bank that is today’s Credit Suisse. It is set up to raise the large amounts of capital needed for railway construction. It is the third major institution Escher has supported, after the North-Eastern Railway and the Polytechnic. 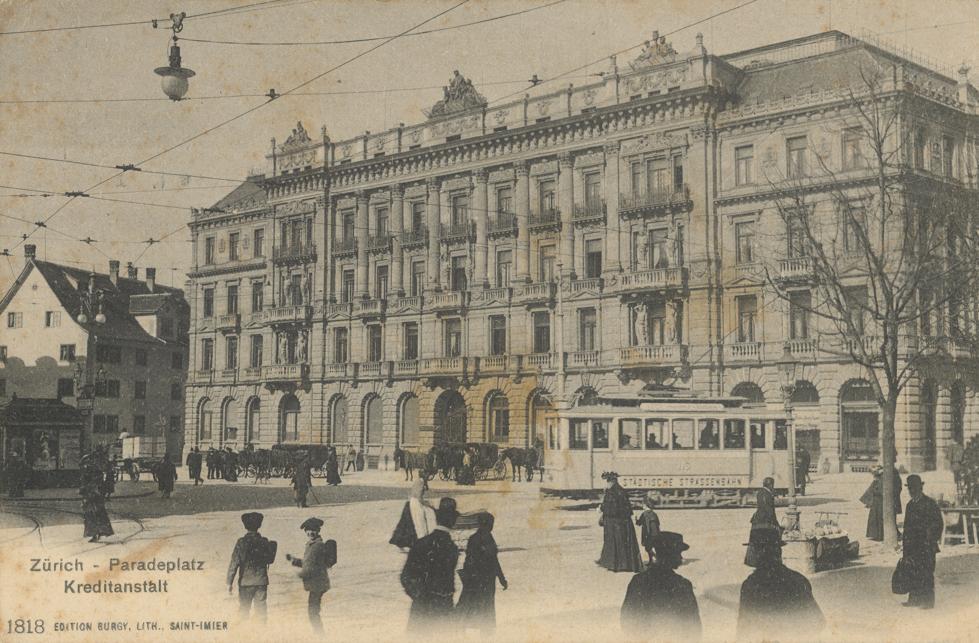 Postcard of Paradeplatz with the Schweizerische Kreditanstalt in around 1910.
ZB Department of Prints and Drawings, call number: Ansichtskarten, ZH, Kreis 1:J, 19 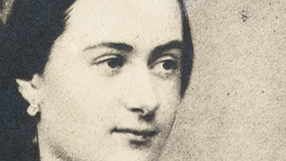 In December 1857 he joins the supervisory board of the Schweizerische Lebensversicherungs- und Rentenanstalt (Swiss Life Insurance and Annuity Company, now Swiss Life). 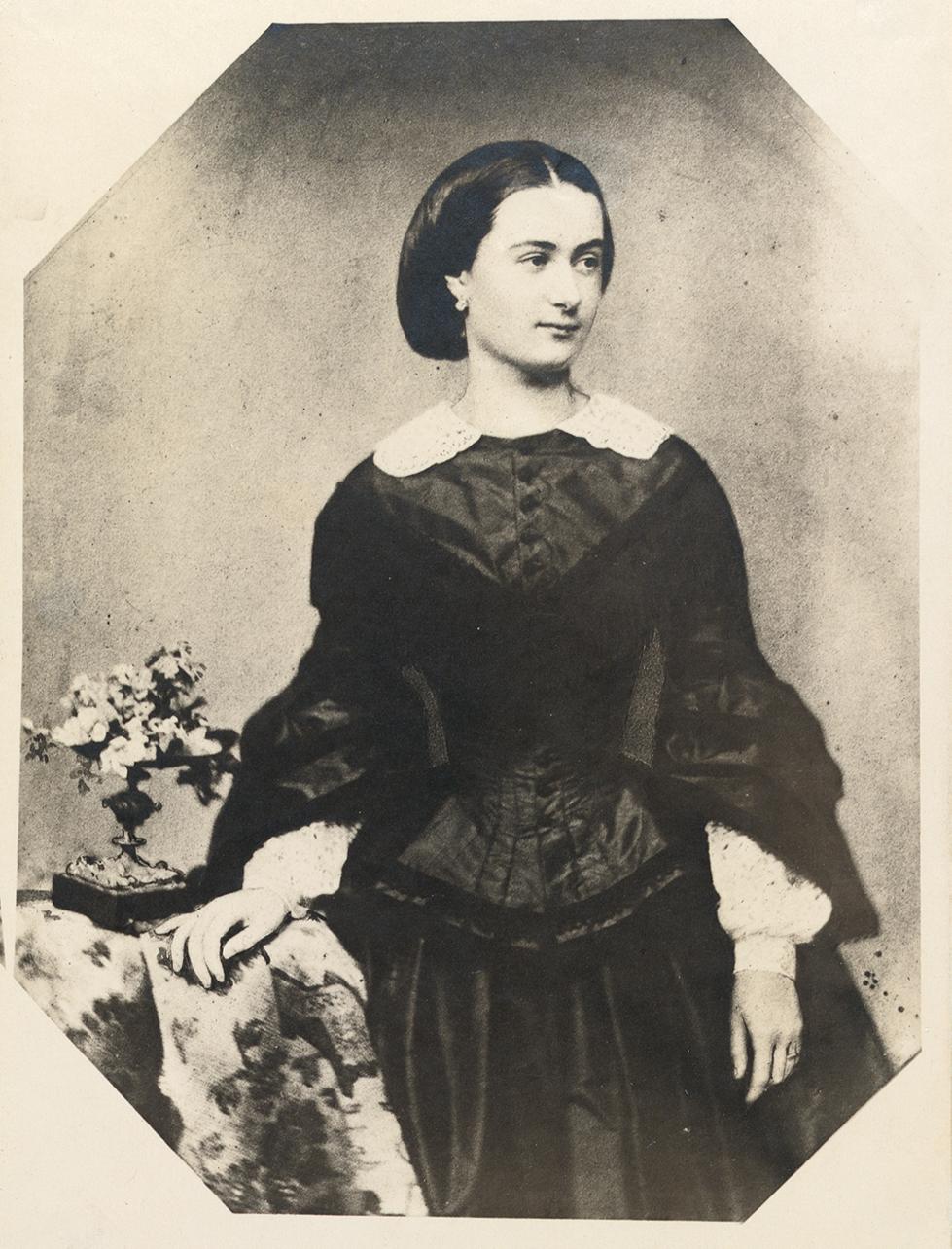 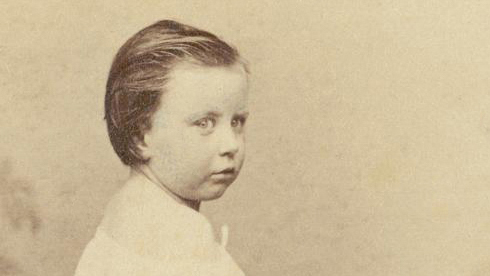 Escher’s second daughter, Hedwig, is born in 1861; however, she dies the following year. 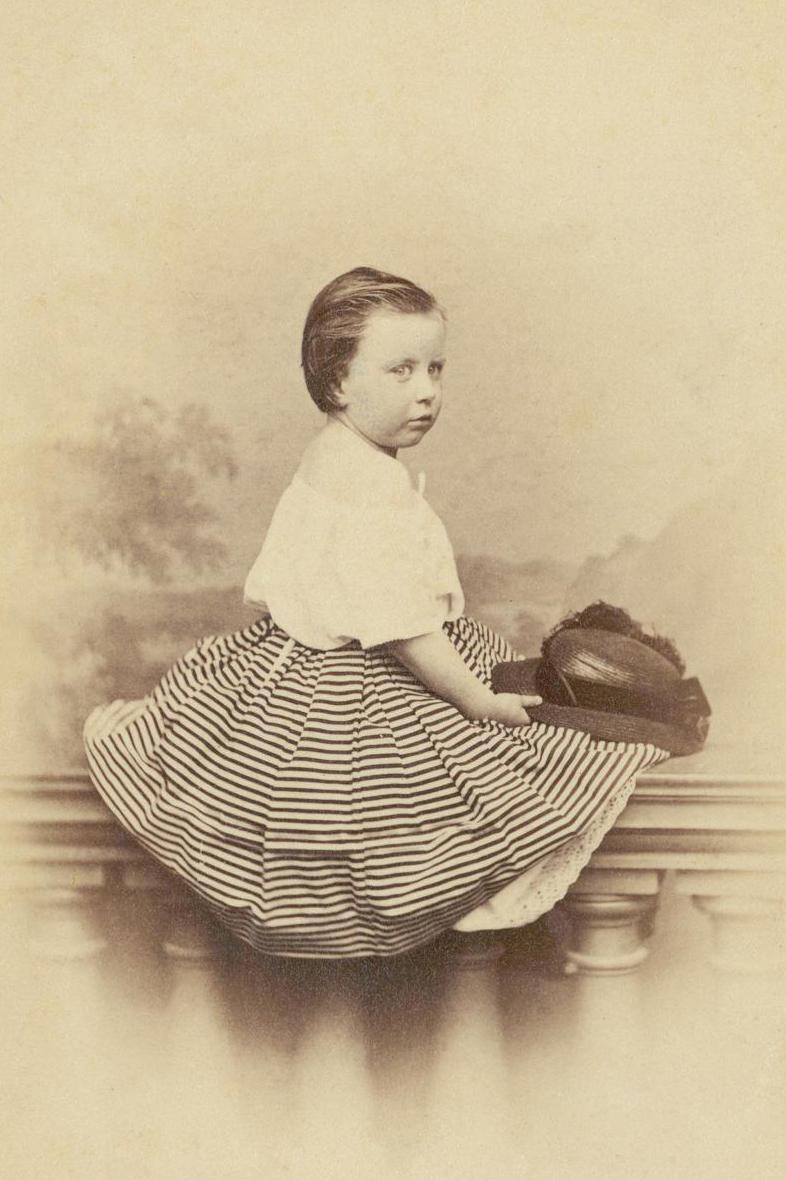 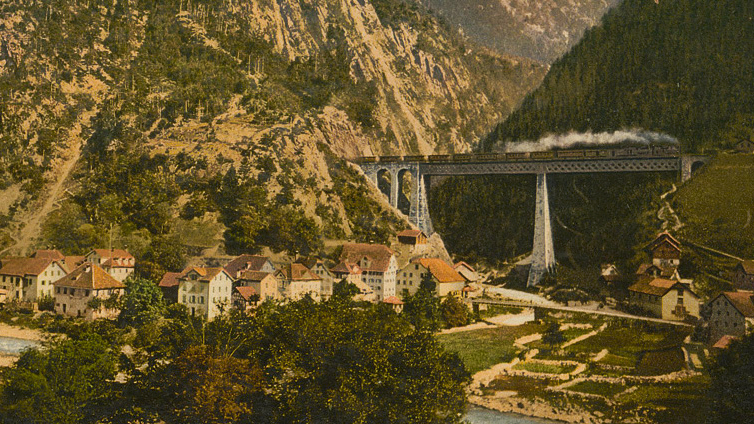 In 1871 Italy and the German Empire ratify the Gotthard Agreement, paving the way for the construction of the Gotthard Railway.

When the Gotthard Railway Company is founded, Escher is appointed Chairman. He takes charge of the first department (railway policy issues, construction).

In 1874 it becomes evident that the project will cost far more than predicted; moreover, construction of the tunnel is behind schedule.

The Federal Assembly grants the Swiss portion of the supplementary subsidy, subject to Escher resigning as a member and Chairman of the Gotthard Railway Company.

The North-Eastern Railway hits a crisis at the same time.

The breakthrough at the Gotthard takes place on 28 February 1880. Alfred Escher is not invited to the ceremony, and his name is not even mentioned.

Escher is also omitted from the guest list at the anniversary celebrations of the Polytechnic Institute, and once again no reference is made to him.

That same year, Escher is again elected Chairman of the Schweizerische Kreditanstalt. 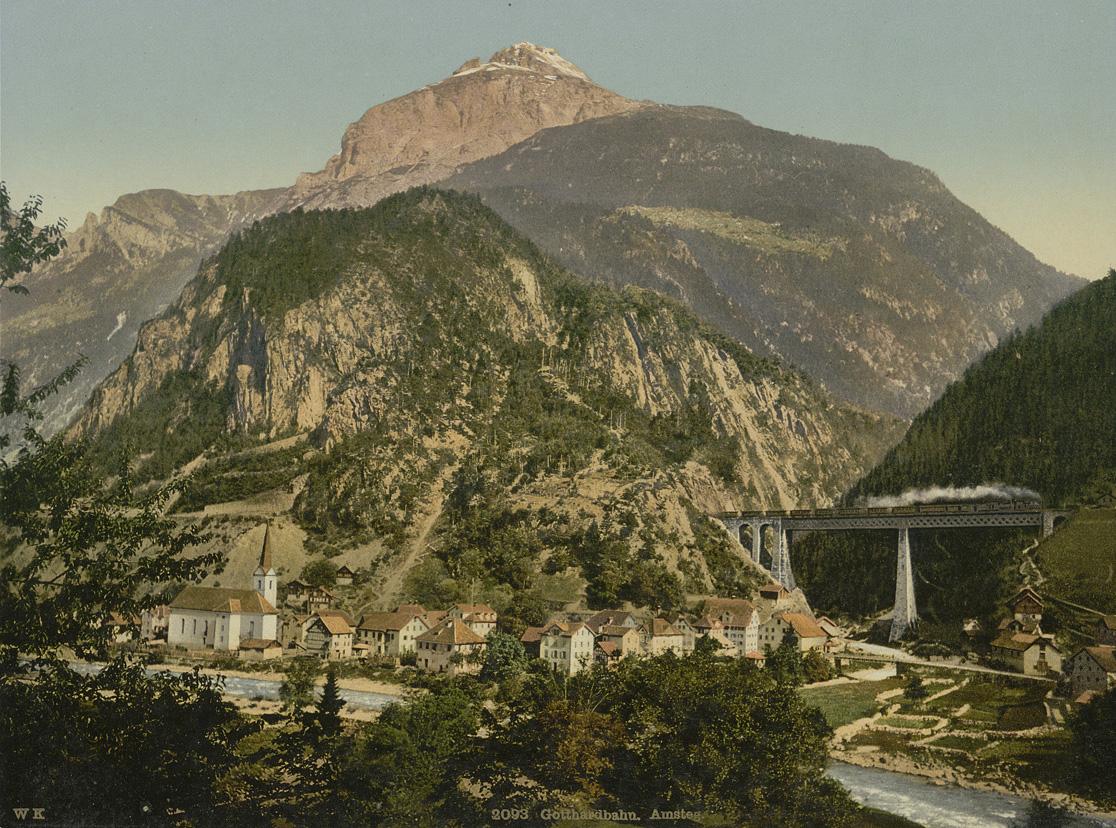 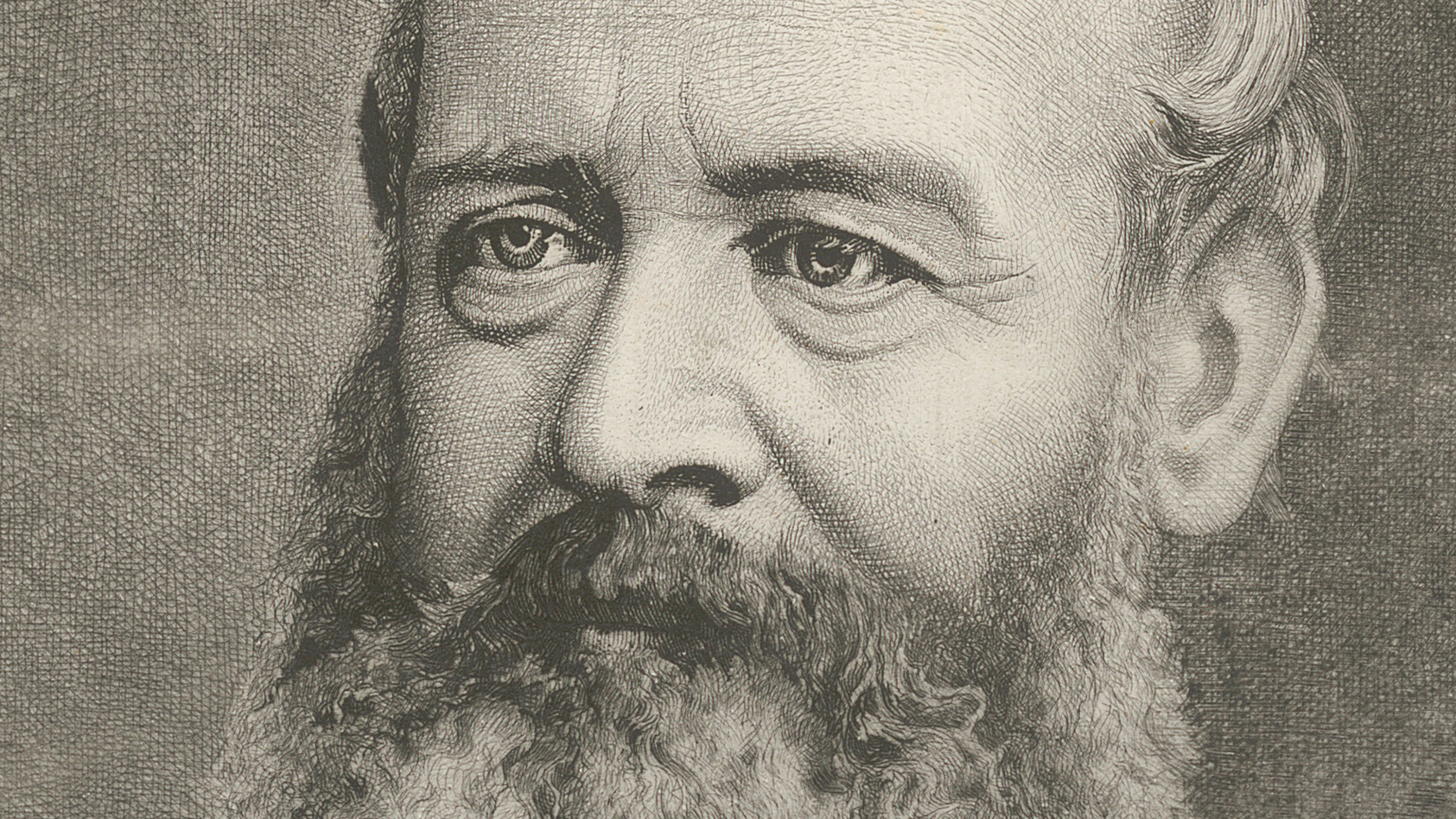 Opening of the Gotthard Railway and death

Having been ignored at the breakthrough ceremony, Escher is invited to the formal opening of the Gotthard Railway on 2 May 1882, but is obliged to decline for health reasons. His name and achievements are referred to at the event.

Alfred Escher is in increasingly poor health, and dies on 6 December 1882 at the age of 63. 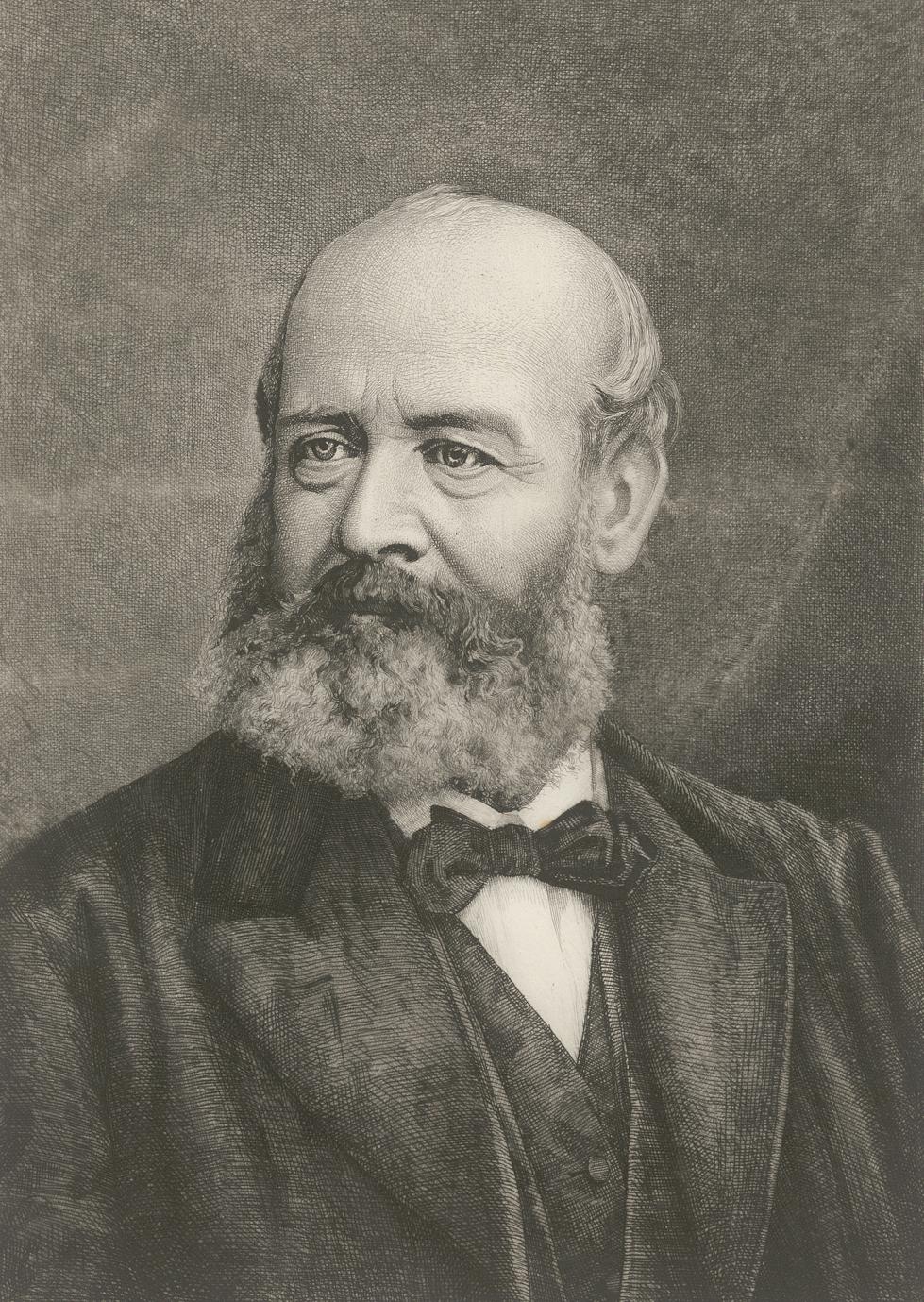 Alfred Escher aged 60, in an etching by Édouard Jeanmaire dating from 1883.
ZB Department of Prints and Drawings, call number: Escher, Alfred I, 9 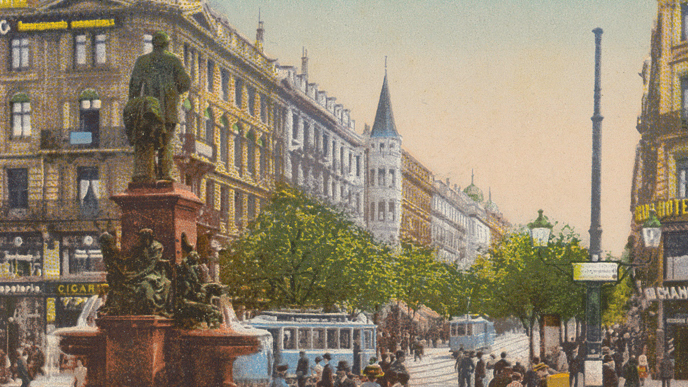 In 1889 the Alfred Escher monument is inaugurated on Bahnhofplatz in Zurich. 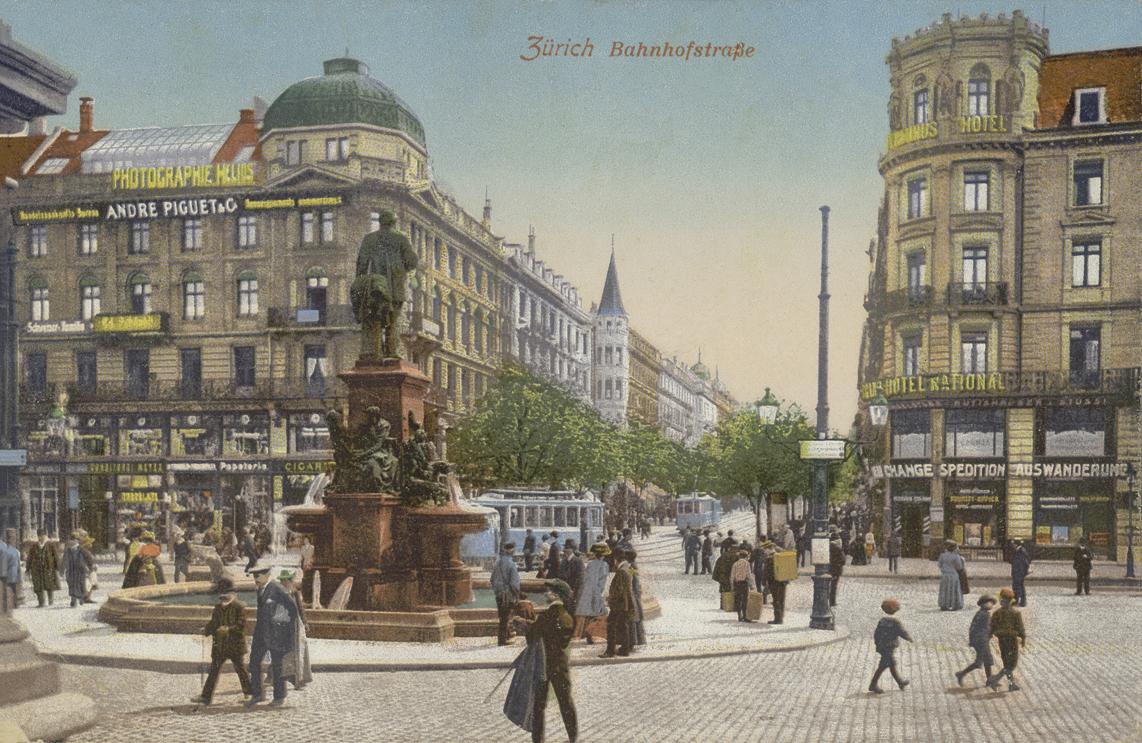 The preserved correspondence was published by the Alfred Escher Foundation. Explore the digital edition of Escher’s letters and discover Alfred Escher the networker.

Alfred Escher in the press

If you would like to know what newspapers and periodicals have to say about Alfred Escher, consult the Zurich Bibliography.

Literature about Alfred Escher held by the Zentralbibliothek can be found in the Rechercheportal.

Follow the Trails of the Future and take part in a range of events shedding light on two leading Zurich personalities from a variety of perspectives.