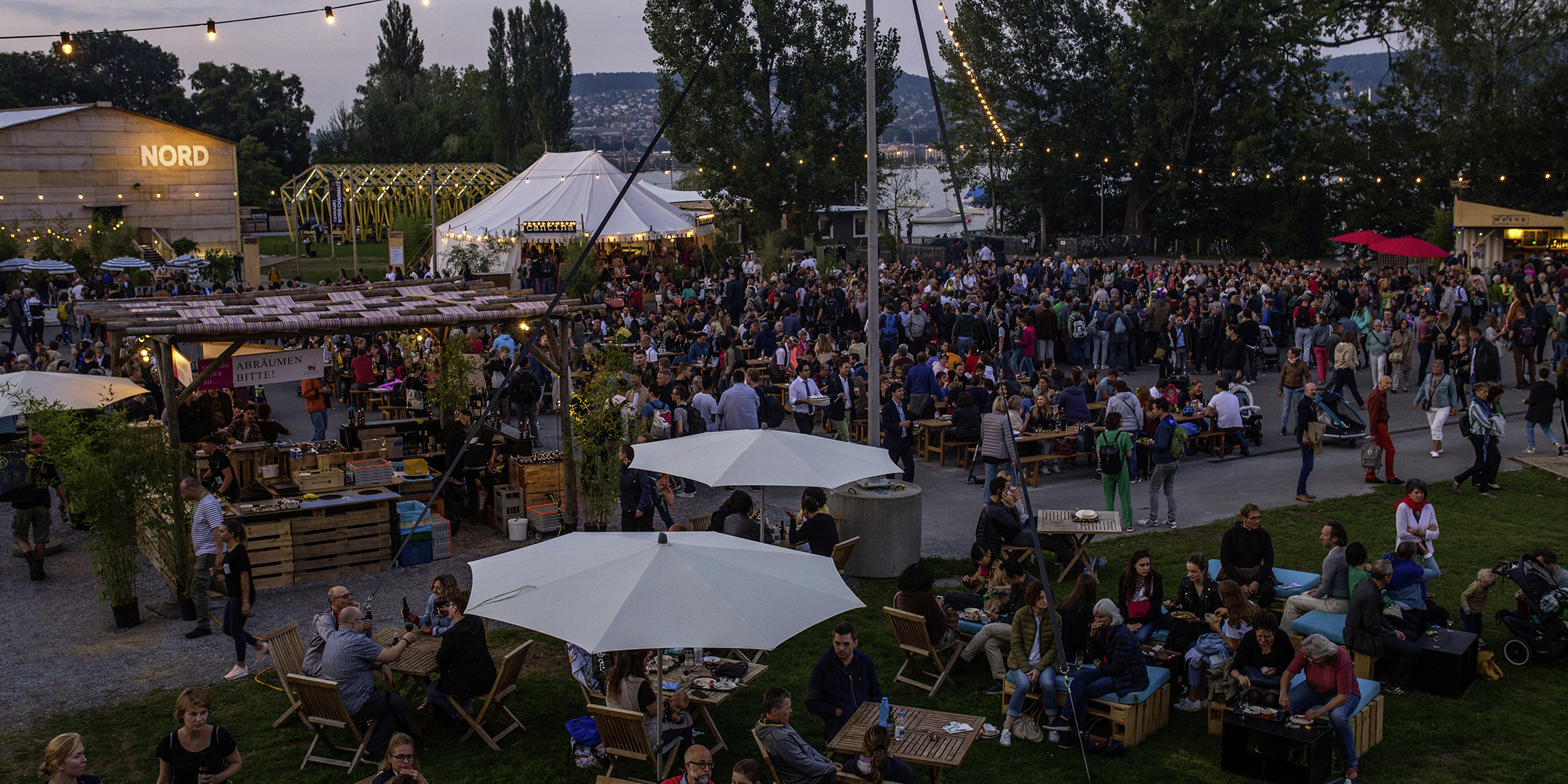 Every year, the Landiwiese park in Wollishofen transforms into an international festival for theatre, performance art and gastronomy. The Lake Zurich Theatre Festival, or Theaterspektakel am Zürichsee, is a staple of city life for many – even if they only stop by for a Sunday stroll or an evening beer. 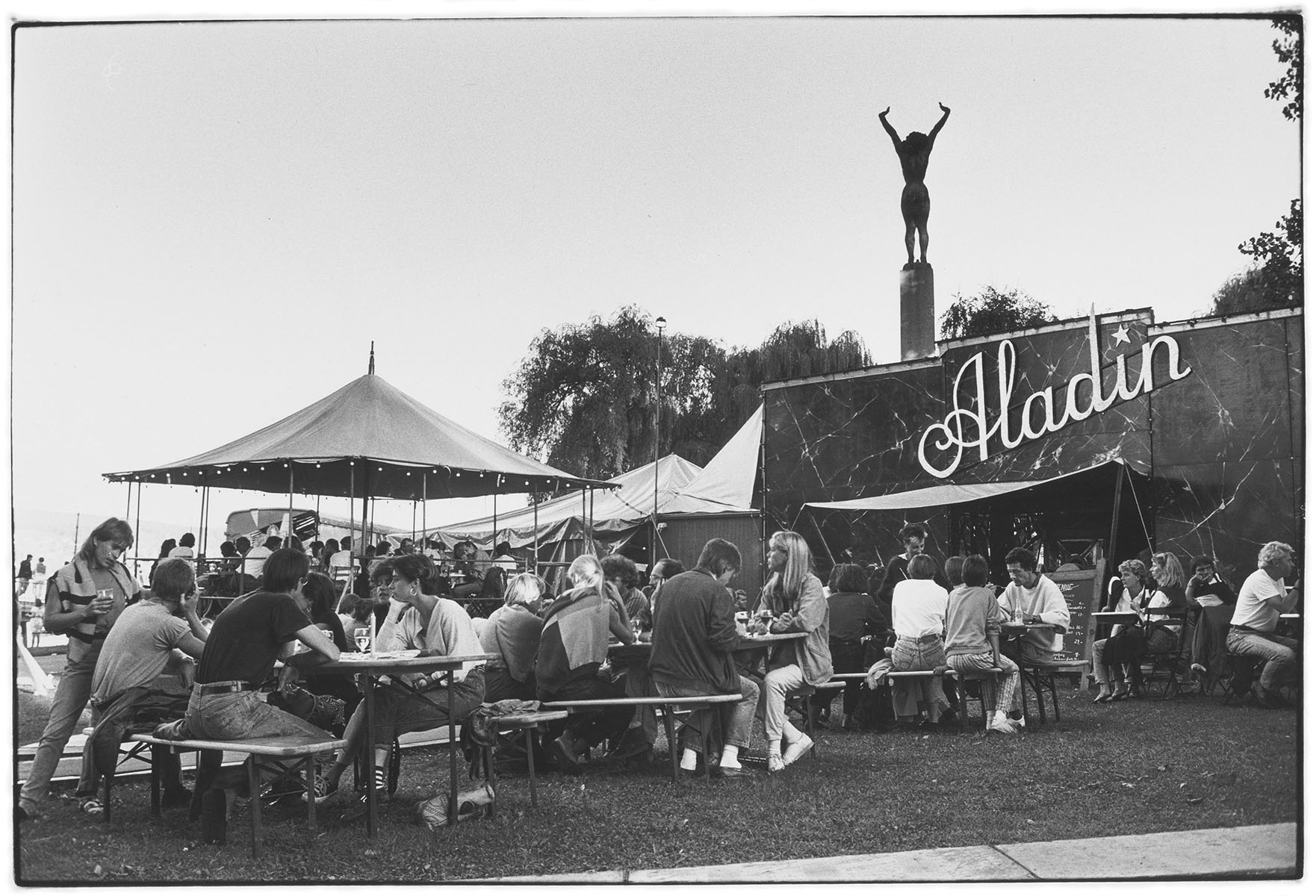 The first edition of the Zurich Theatre Festival took place in summer 1980. Seventeen companies from Switzerland, Europe and the US performed in three circus tents over eight days on the Landiwiese. The team behind the event wanted to create something new: a festival that stood apart from classical theatre and offered a stage for international or unconventional artists.

This approach hit a nerve, with 12,000 tickets sold in its first year alone. As a result, the Theatre Festival was expanded, initially by two extra days the following year, and then by even more, so that up to 1990, the event always lasted around two weeks. At the end of the decade, those involved took stock in the ‘Spektakel’ anthology.

An established heavyweight of the ’90s 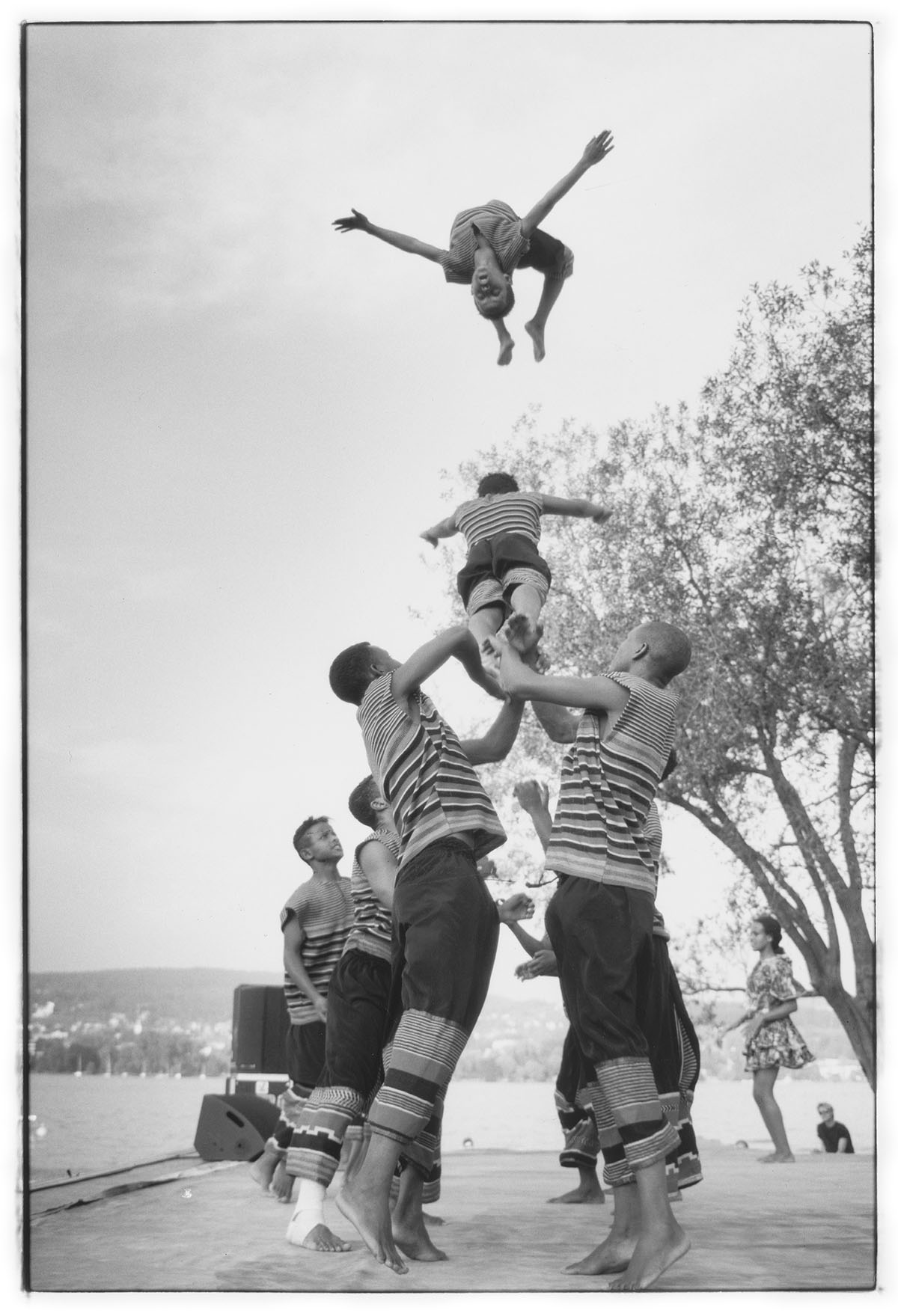 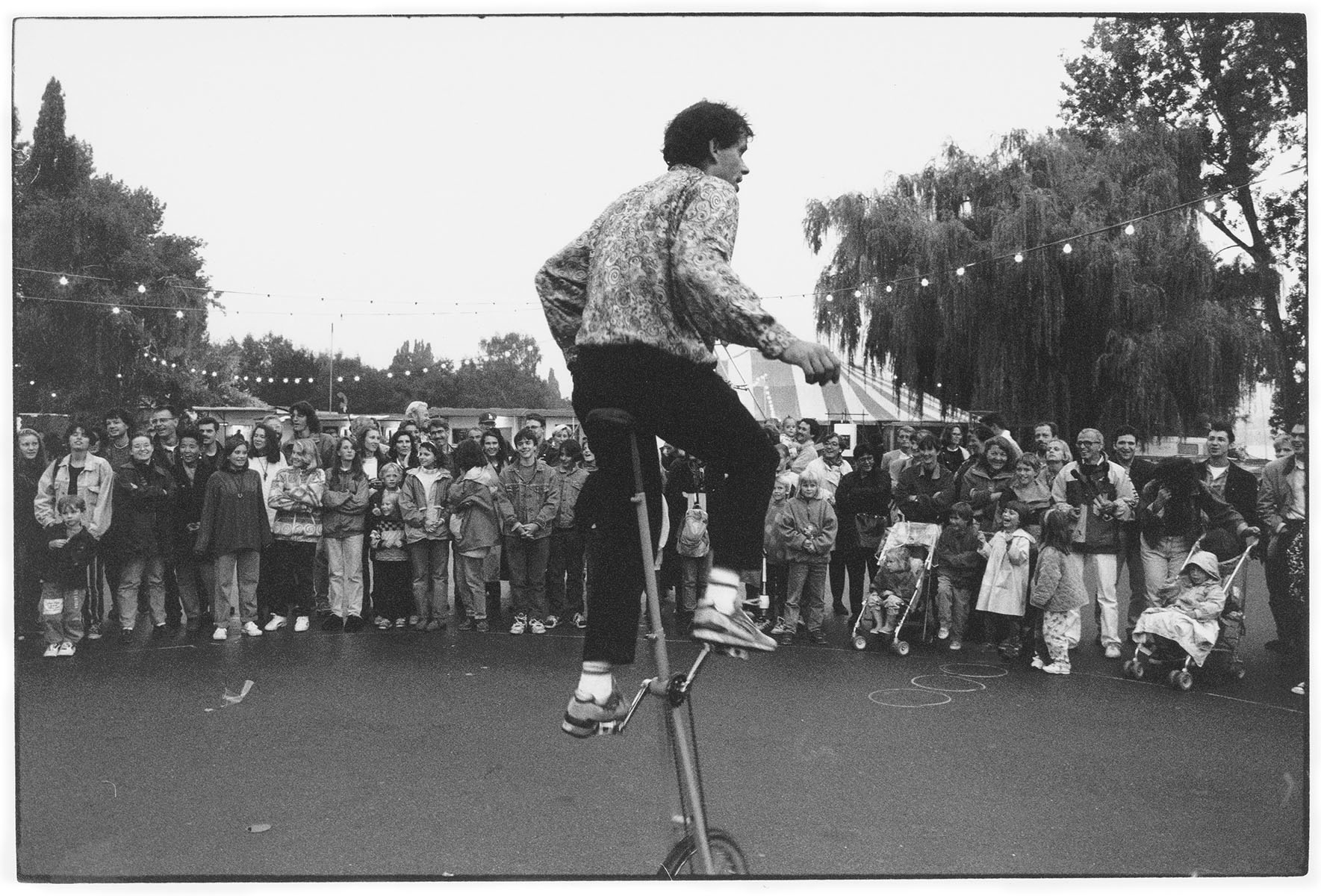 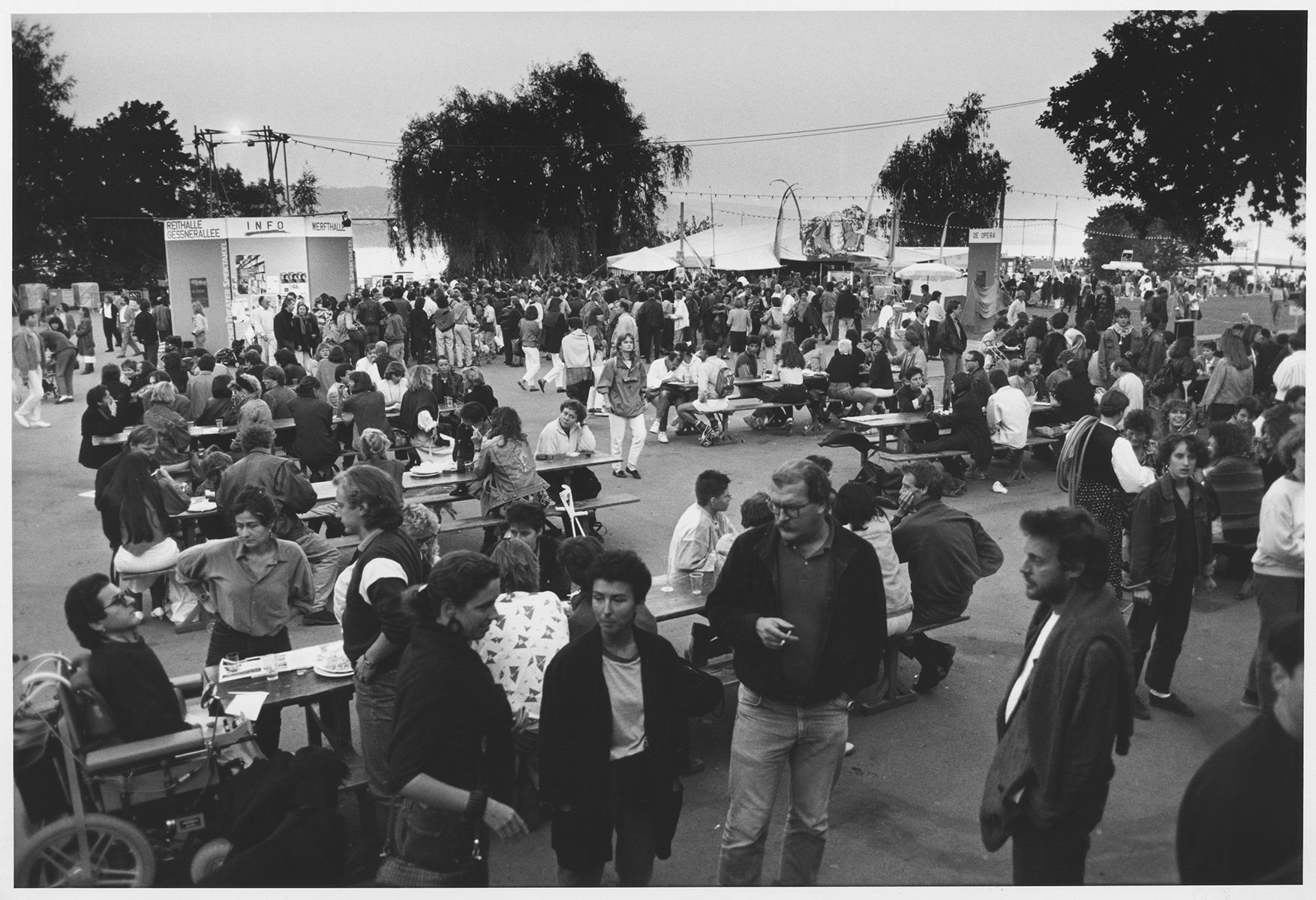 A mere decade after it burst onto the scene, the Theatre Festival had already become a firm fixture in Zurich’s cultural landscape. In the 1990s, the artistic directors opted for disruptive theatre from Japan, Italy and Israel. It welcomed such groups to Zurich as the Akko Theatre Centre, an alternative Israeli theatre. A revolutionary Belgian dancer, Eastern European directors and – for the first time in the festival’s history – a group from the Arab world also appeared.

It was during this period that an early festival venue – the big circus tent – disappeared from the Landiwiese. But new venues joined the programme, including the Saffa-Insel and selected locations across the city and beyond. That’s how one theatre group ended up performing at Wiedikon railway station, while another took to the stage at the synagogue in Lengnau, in the canton of Aargau, and in the tunnel under the main railway station.

New venues for a new millennium 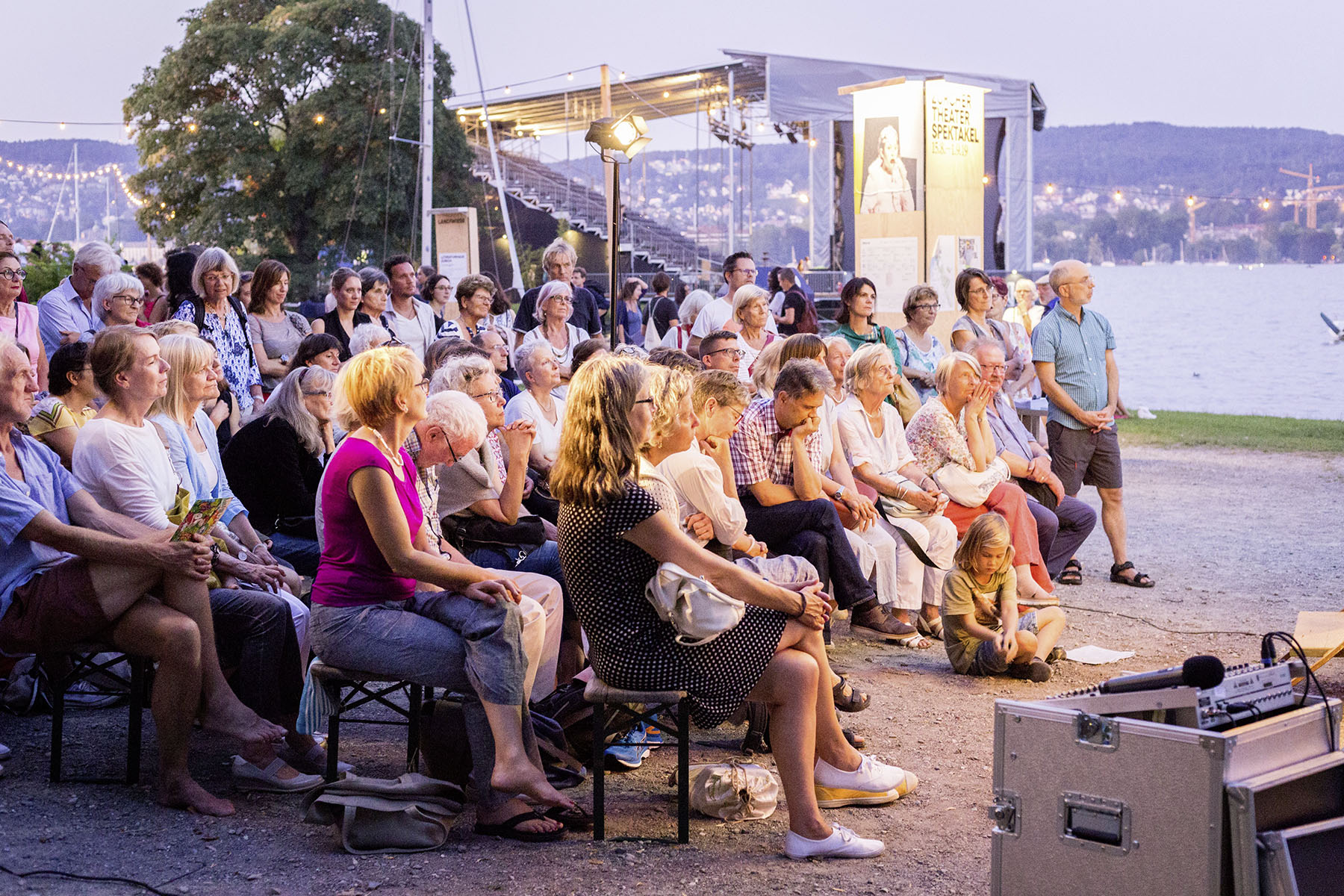 In 2002, the festival got a new landmark venue in the form of the Seebühne (Lake Stage), which sits on the water on the Saffa-Insel. Other newcomers: the 330-seater Bühne Nord (North Stage) and the smaller Bühne Süd (South Stage), which seats 215 right by the lakeside.

The reorganisation of the festival venues was accompanied by a shift in focus for its programme. Many young artists and creatives from the Middle East and east Asia, Africa and Latin America joined the schedule, tackling living conditions in their home countries in their work. The festival also staged many productions at the crossroads between different art forms – including musical theatre performances and stage sets heavily influenced by visual art.

Switzerland’s free theatre scene also began to enjoyed a more powerful presence in the new millennium: in 2014, for example, the festival played host to the premiere of ‘The Civil Wars’ by Milo Raus, a critical piece on Europe’s political future. 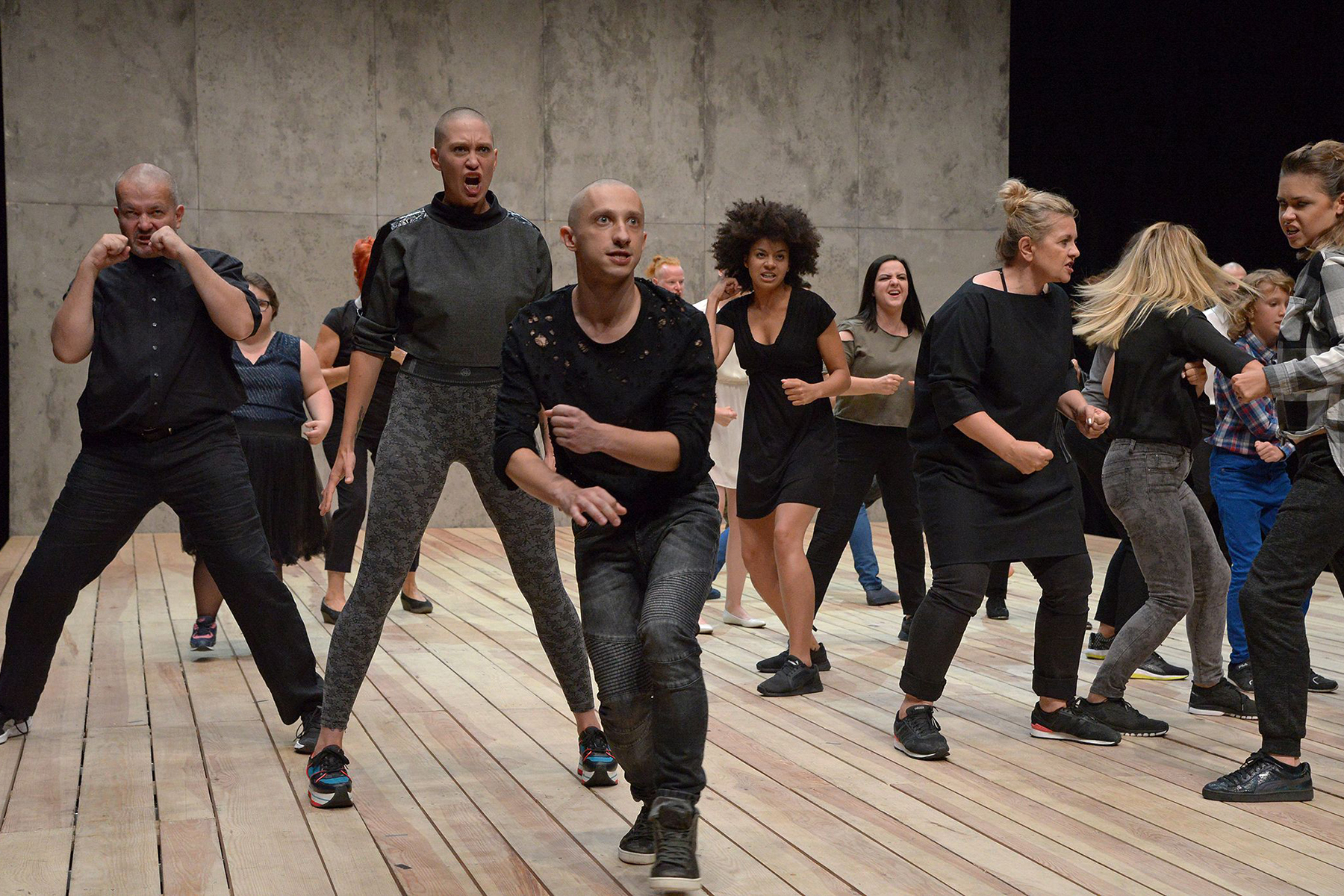 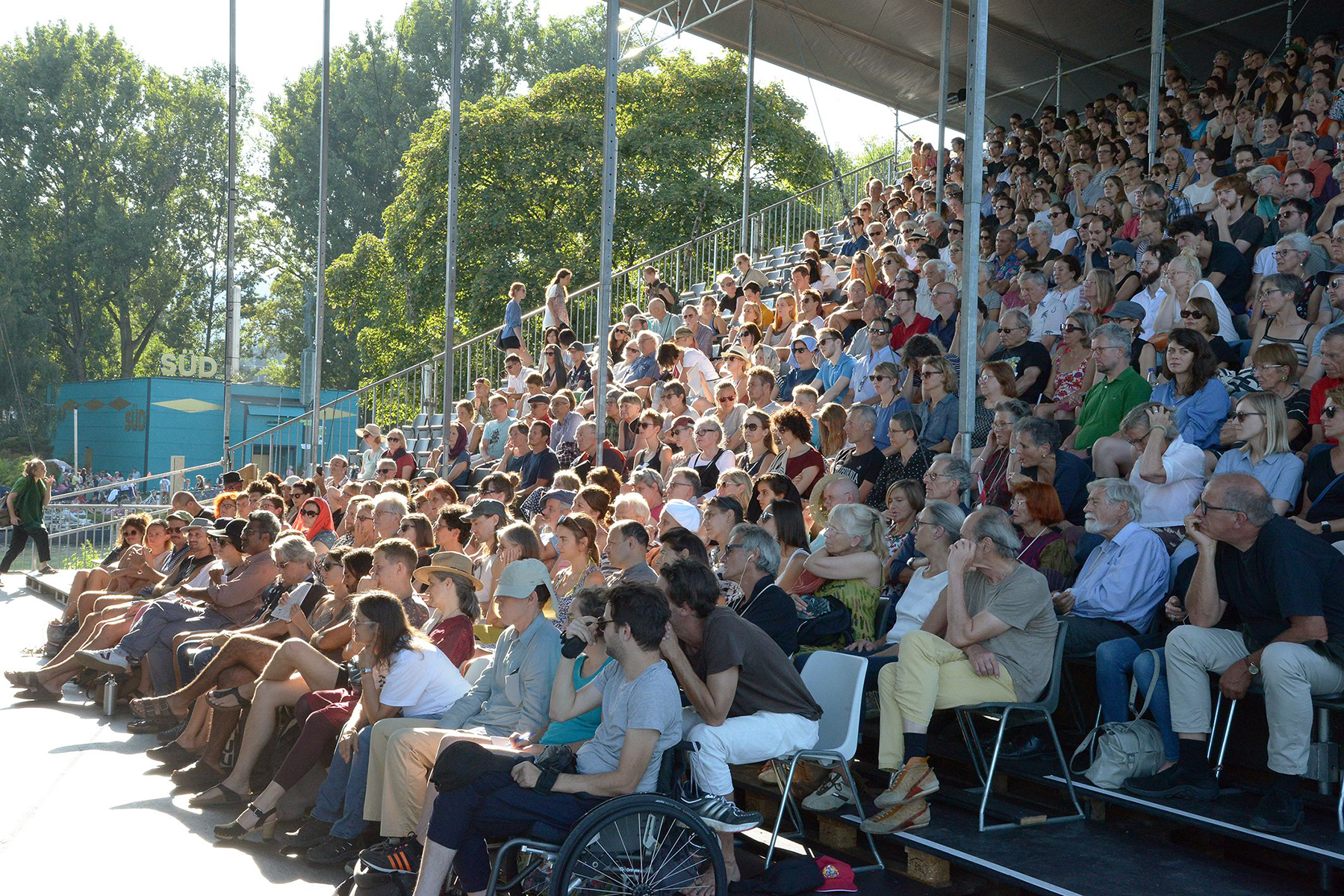 Audience at the ‘Talking on Water’ show (Image: © Christian Altorfer) 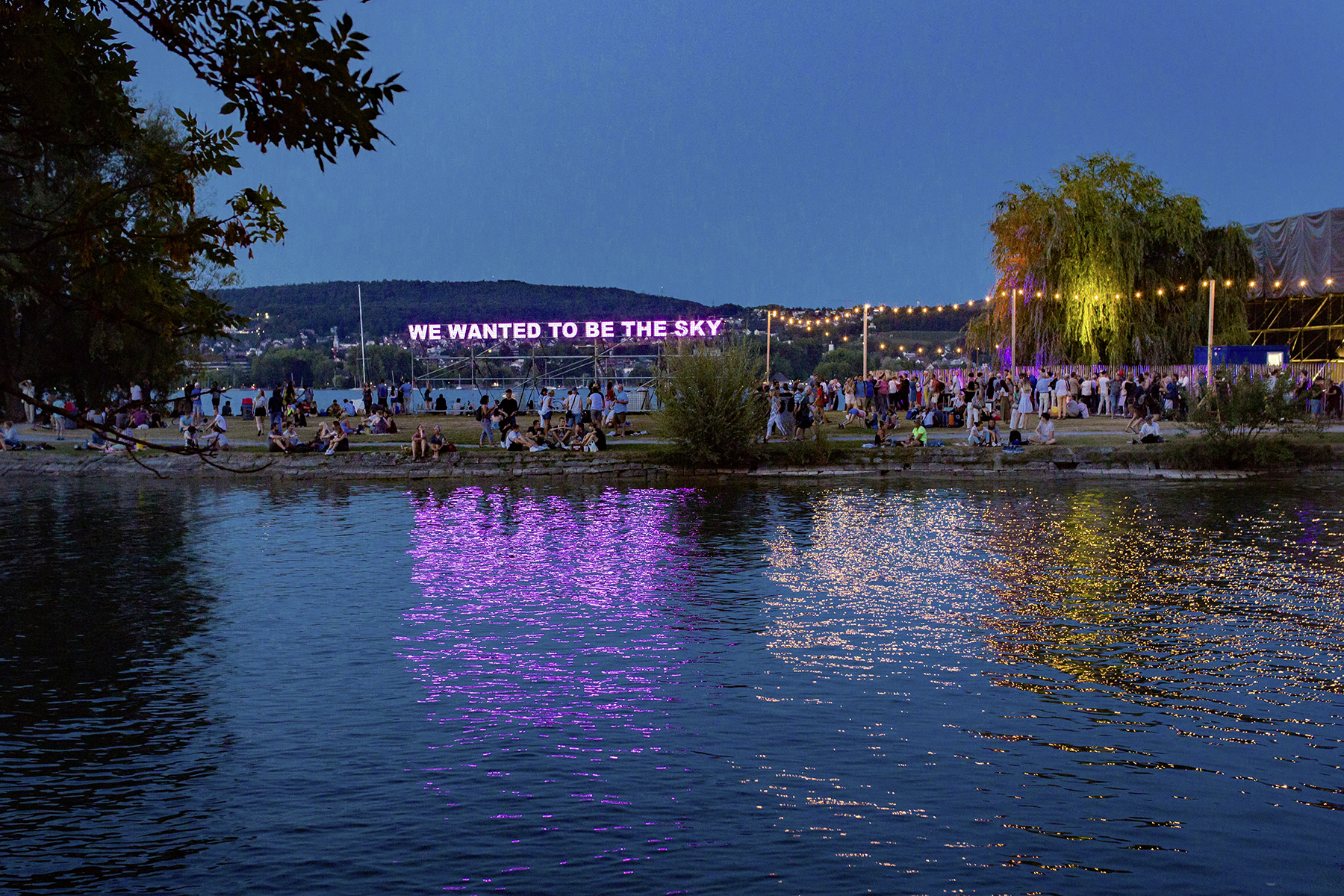 The Saffa-Insel with the Seebühne and neon installation by Tim Etchells (Image: © Christian Altorfer)

Festival photographer Christian Altorfer has been there since day one and still documents the festival today: he’s shot more than 2,000 shows and has an archive of more than 30,000 photos – mostly taken from the audience’s perspective. His tip for festival-goers: ‘Go and see for yourself, even if it’s raining.’

Another longstanding institution is Zurich’s Buchhandlung sec52 bookshop, which has supplied festival audiences with reading matter for more than 30 years. Sometimes, booksellers Ricco Bilger and Thomas Howeg can be found on the Landiwiese until midnight, deep in literary discussion and debate. Opening up a bookstore for the Theatre Festival was never the plan, says Bilger. He was asked by the Technical Manager, Werner Hegglin, who wanted to offer visitors an additional intellectual highlight. But it’s not just festival attendees who benefit from this arrangement: meeting book-lovers ready to encounter their next great read is what makes the festival so special for Bilger – as well as the temporary change in location from District 5 to the Landiwiese. 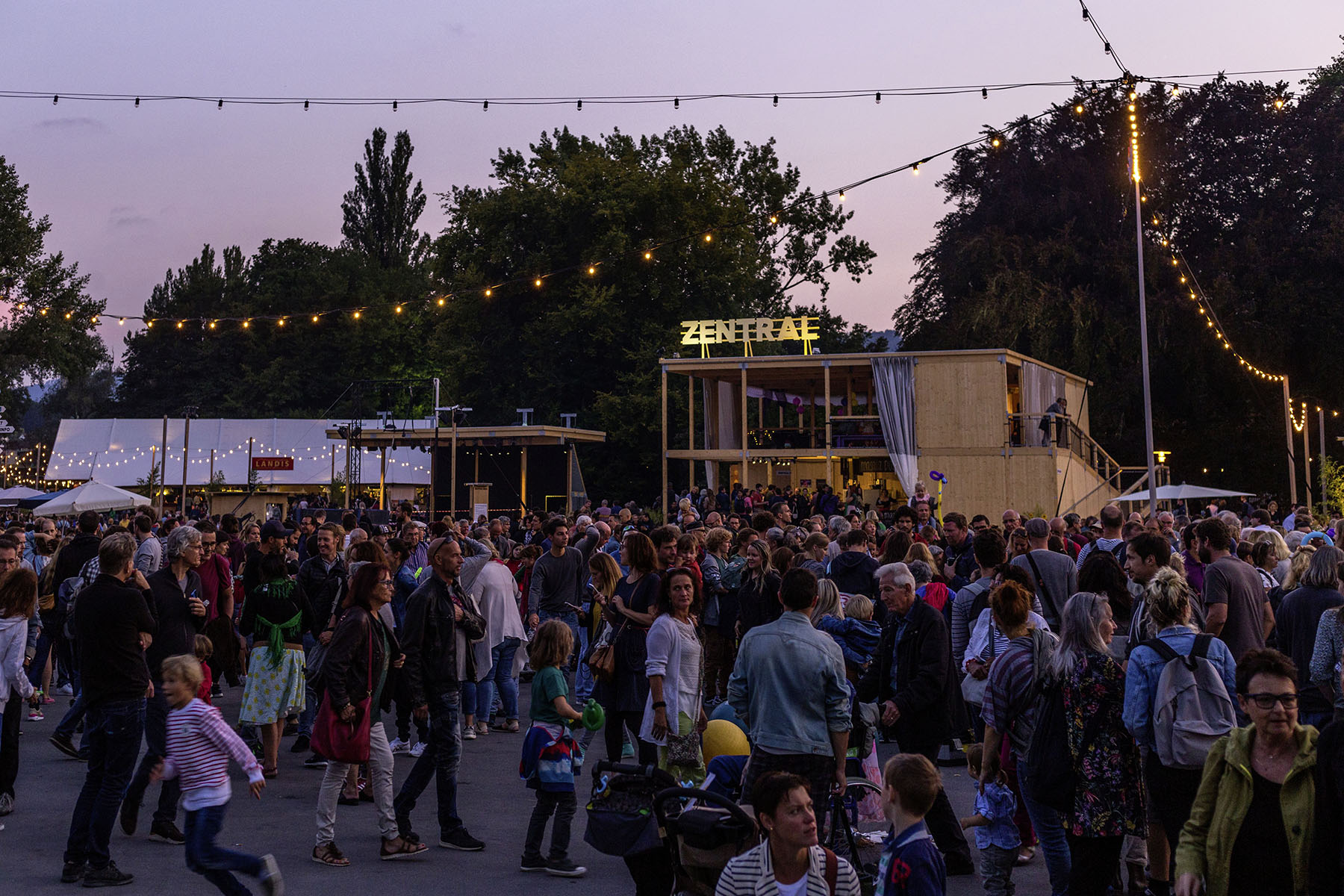 The generational changing of the guard that took place among the festival directors in 2013 and 2015 did not put the brakes on the festival’s success: in the record-breaking year 2019, the event organisers chalked up 25,000 ticket sales for theatre performances and attracted more than 150,000 festival visitors. Even after the pandemic, the show must go on – and the dates for 2022 have long been established: the Theatre Festival will take place from 18 August to 4 September.

Over 18 days, a festival will once again take place on the Lake Zurich site, where performances will be put on in the great outdoors and artistic displays and installations will be showcased in a variety of venues. The Zurich outdoor festival isn’t just a major event for the city – it’s a cultural happening with an impact that reaches far beyond Zurich.