This exhibition from 1 December 2010 to 31 March 2011 explores the life and work of Zurich artist Isa Hesse-Rabinovitch. 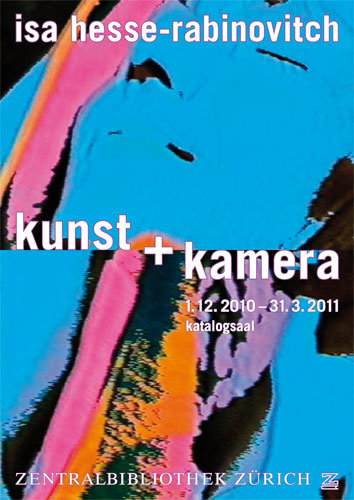 “Outsiders must assert themselves or they will fail. They must stand by who they are, have no fear, and not adapt.” Isa Hesse-Rabinovitch

This exhibition from 1 December 2010 to 31 March 2011 explores the life and work of Zurich artist Isa Hesse-Rabinovitch.

Isa Hesse-Rabinovitch was born in Zurich on 19 December 1917 and died on 14 August 2003 in Küsnacht. She is one of the most exciting, multifaceted and idiosyncratic Swiss artists of the second half of the 20th century. She is best known as a film maker, and was a leading figure in the insurgent era of Swiss cinema in the 1970s. Yet having come to the world of film-making relatively late, at the age of 50, she found it far from easy to gain acceptance. Indeed, while Isa Hesse-Rabinovitch’s experimental films and videos were well received abroad – “Siren Island” premièred in 1982 at the Museum of Modern Art in New York – she faced a constant battle to achieve recognition for her poetic works in her homeland. But she was not one to give up easily. Even as the young wife of Heiner Hesse, the grandson of Hermann Hesse, with three small children to look after, she contributed substantially to the family’s income: having initially worked as an illustrator for publications such as the recently launched women’s magazine “Annabelle”, she later travelled the world as a reporter and photographer for the Tages-Anzeiger newspaper and Swissair Gazette, which suited her strongly independent mindset.

In 2004 Isa Hesse-Rabinovitch’s estate, along with those of her parents, was donated to the Zentralbibliothek Zürich. The exhibition “kunst + kamera: isa hesse-rabinovitch” presents the artist’s rich and diverse oeuvre through the medium of her biography. In addition to Isa Hesse-Rabinovitch’s well-known work as a film maker, it also shines a spotlight on her less-known graphic and photographic works and her texts – as a young writer, Isa Hesse-Rabinovitch chiefly wrote Dada-esque poems.

This exhibition presents the artist and film maker Isa Hesse-Rabinovitch (1917–2003) to the public for the first time in her multifaceted self. It begins with a look at her early work as an illustrator in the 1940s in Zurich, moving through her development as a photographer in the 1960s, to her final 20-year span of film and video making. Many of the exhibits have not been seen publicly since they originally appeared in newspapers, magazines and as advertisements many years ago. The impetus for this exhibition was the generous donation by her family of Isa Hesse-Rabinovitch’s estate to the Zentralbibliothek Zürich following her death in 2003.

Russian-Austrian by birth, Swiss by naturalisation, Isa Hesse-Rabinovitch grew up in artistic bohemian circles in the inter-war period in Zurich city. The first three showcases present her family background and early life until about 1935. Her father, Gregor Rabinovitch, was a well-known and respected graphic artist who came to Zurich during the First World War with his wife, Stefanie Rabinovitch-von Bach, also a trained and practising artist. Self-portraits of both parents feature at the beginning of the exhibition, as do depictions of Isa by her parents. The plaster bust of Isa, aged seven, was modelled by Karl Geiser (1898–1957), an artist friend of her father’s. The little etching hanging to the right of it by Gregor Rabinovitch shows Geiser at work on this sculpture.

It was most probably clear to Isa from her earliest days that she would earn her living as an artist. Her childhood drawings and prints are numerous and show early confidence. Already, we see what would become favourite themes emerging: the circus, theatrical costumes, erupting volcanoes and animals, particularly horses. The little models of horses in the showcases were Isa’s own. The circus theme seems to have appealed to the artist’s sense of being outside the mainstream of society and she enjoyed spectacle, show and theatre of all types. The image of the volcano is at the centre of her 1981 film “Siren Island”.

Suspended between the showcases are three banners containing texts by Isa. Her early poems have been described as “Dada-esque”: nonsensical and using word association and the random combination of ideas. Like the Dadaists, who formed in Zurich a year before her birth, Isa placed a high value on dreams and the workings of the subconscious, preferring instinct and intuition over rationality.

Periods of study at the art schools in Zurich and Vienna followed a placement in the graphic workshops of the printer Orell Füssli. As the daughter of a Russian Jewish father, she found it impossible to continue her studies at the art school in Vienna after the German annexation of 1938. The second hanging banner displays three texts, one of which is in the form of advertising slogans for a department store, dating from this Viennese period. The third Viennese text, “Der Ursprung” (“The Source” or “The Origin”), could be a reference to her Swiss homeland, as it describes alpine landscapes.

Isa’s undeniable talent for drawing is evident in showcase 4 from the wonderful botanical study of sweet peas and the compelling self-portrait from 1940. We know that she won prizes for her graphic design at the Vienna School of Arts and Crafts. One example of a piece from this period (“Sozialversicherung Wien”) is on display in the same showcase.

On her return to Zurich, Isa Hesse-Rabinovitch worked prolifically, drawing illustrations for newspaper stories, designing advertisements and illustrating books. Some of the latter were by the German writer Hermann Hesse, whose son Heiner she married in 1941. The advertisements, for products such as “Jaeggli Faden” and “Schaffhauser Wolle”, are eye-catching and expressive, often revealing a sense of humour. Although quaint by today’s standards, they nonetheless contain a clarity and compositional integrity which stand the test of time.

Left of the book illustration showcase hangs a third banner with Isa’s declamatory text and image composition for one of her first short films, “Monumento Moritat” from 1969. The pages (reproduced from her autobiographical publication “Das grosse Spiel Film” from 1998), demonstrate her working method in this film of coordinating the spoken verse-form soundtrack, which she composed herself, with her photographs of funerary monuments and public sculpture. The central idea in this film is the patriarchal tradition of viewing the female body (artistically and literally) as a vehicle for grandiose notions. This great idea is now defunct, declares Isa.

Around 1960, Isa began to do two things passionately: photograph and travel. In the next showcase, we continue with her photographic work. The circus re-appears as subject, both on- and off-stage. But it is travel photography above all that seemed to absorb the artist passionately. Working as travel correspondent, she toured the world with her Rolleiflex camera, quite alone, recording and documenting daily life, particularly that of ordinary women and children. Hundreds of these images were published in the press. Her articles often accompanied them.

Isa used her camera as an all-seeing eye: close-ups and enlargements of the natural world appeared around this time. These were sometimes collaged with shots of body parts, often the human eye. Some of these photocollages remind one of the Surrealists’ work, with whom Isa shared much in common. The artist was able to exhibit her photographs from the earliest days: people found them intriguing.

On the film screen in the centre, we can see short excerpts from several of her films (“Spiegelei” 1969, “Tell Spott” 1974, “Die Selbstporträts und das Lieblingslied meines Vaters, Gregor Rabinovitch” 1976, “Julie From Ohio” 1978, “Siren Island” 1981, “Body Body Blues” 1986 and “Geister und Gäste” 1989). The remainder of the exhibition focuses on her film and video work. Film-making was her main artistic practice from 1969 for the next 20 years. Her first short film “Spiegelei” (a word-play that means both “Reflections” and “Fried Egg”) was inspired by water reflections in the canals of Venice, but also by the Swiss artist Arnold Böcklin’s work, which she admired. In all of her films, music is important, forming equally as much of the atmosphere as the visual.

Isa Hesse-Rabinovitch’s film-making years coincided with the heady days of the women’s movement: in feminist circles, Isa was admired and welcomed. She initiated the first festival of women’s films in Switzerland in 1975. She herself, however, explicitly refrained from describing herself as a feminist: for Isa Hesse-Rabinovitch, freedom of expression and determination to follow her creative ideas through was, quite simply, a given. She had no need for a manifesto, she did what she wanted. However, many of the themes explored in her films do deal with issues of being female. One of her most successful films, the first feature film she made, “Siren Island” of 1981, presents evocative cameos of individual women, playing themselves. They all hail from the often seedy, cabaret worlds of vaudeville, of the bar singer and of the circus. Isa imbues them with an aura of the legendary Greek sirens who lured men to their fate through their singing.

All of her films are episodic rather than narrative in character. Isa Hesse-Rabinovitch was renowned for her unconventional working methods: the “actors” were typically friends or sympathetic souls whom she met by chance and, who frequently either played themselves or someone very like them. “Chance”, coincidence and spontaneity were the building blocks for her visual sequences, which can at times give the films a fragmented feel.

In the early 1980s, Isa discovered the more portable and convenient video camera. The work from this period is often based around images of the human body, although at times so abstracted as to be rarely recognisable. She photographed these videos from the television screen, enlarged the prints, mounted them on to aluminium plates and exhibited them to great effect. Twenty-four of these photographs are on display; their strength lies perhaps primarily in their colour and in their formal quality. This “video art”, as she called it, mediated through various technical processes as it was, could be seen as a forerunner of the type of work which was to be produced by younger artists through the 1990s.

Isa made the haunting film “Ghosts and Guests” in 1989 when she was 71. Here, she looks backwards in time, dealing with aging and transience and ultimately with death and decay. A ruined grand hotel is the star of the work. Music again is interwoven to poignant effect. The film reads at times like a documentary, but is much more. Poetic and nostalgic, it recreates a sense of loss and timelessness in a poignant evocation..

In the little viewing room at the end of the exhibition you can read articles reflecting the critical reception of Isa Hesse-Rabinovitch in PDF format on the computer and watch several of her films with headphones. It is worth taking a look at her film biography “Das grosse Spiel Film”, a beautiful publication which she designed herself, published in 1998.