“Tracks in the quicksand”

“Tracks in the Quicksand” was the title of Oskar Kokoschka’s 1956 anthology of stories which he dedicated to his wife with the words “For Olda / Told by O.K.”. In the copy that he gave to Olda, Kokoschka added a coloured pencil drawing of his gaunt silhouette walking through a desert. The footprints in the sand remain, metaphorically, as the only record of his eventful life. 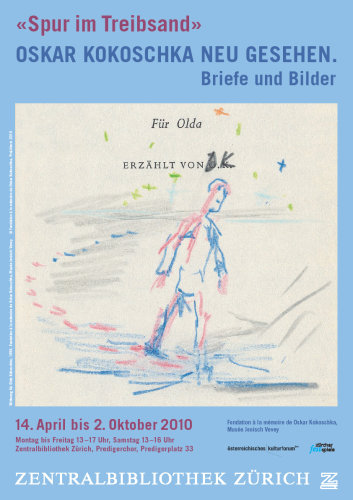 Seeing Oskar Kokoschka in a new light:
letters and pictures

The title and the coloured pencil drawing that feature prominently on the poster and the accompanying publication symbolise the aim of the exhibition at the Zentralbibliothek Zürich: the more than 20,000 documents from the artist’s literary estate that are among the countless treasures of the Zentralbibliothek seem at first like grains of sand in a desert. In search of a way into this vast array of material, an international group of Kokoschka researchers set out to find tracks amid the sand. In the process, they came across new footprints and unknown paths in Kokoschka’s convoluted life that shed new light on the artist. On display are many previously unknown documents on his biography, his loves and passions, his journeys throughout Europe and North Africa, his painful experiences of war, persecution and exile, the “School of Seeing” – the international summer academy that Kokoschka founded in Salzburg in 1953 –, his work as a set designer for theatre and opera, and his turn towards the ancient world after the Second World War. Alongside autograph manuscripts, drawings and photographs from the artist’s literary estate there are works from the Fondation à la mémoire de Oskar Kokoschka in Vevey, with images and texts complementing and illuminating each other to offer new and surprising insights into the life and work of the great artist.

The exhibition concept and accompanying publication were developed by the Zentralbibliothek Zürich in close cooperation with the Fondation à la mémoire de Oskar Kokoschka. Thanks to generous gifts from Olda Kokoschka, both institutions hold unique collections covering every stage in the artist’s life and work. In 1981 Olda Kokoschka entrusted her husband’s literary estate to the care of the Zentralbibliothek Zürich’s Manuscript Department. The volume of correspondence and manuscripts is steadily growing, thanks to assiduous collection activity and continual purchases by the Department. Seven years later, the artist’s widow set up the Fondation à la mémoire de Oskar Kokoschka, choosing as its home the town of Vevey, just a few kilometres from where she lived. The foundation now houses the world’s largest collection of the artist’s works.


2010: a year of Kokoschka in Switzerland

The exhibition at the Zentralbibliothek Zürich marks the opening of a year of Kokoschka in Switzerland during 2010. A hundred years ago the artist, who was born in Austria in 1886, made his first trip abroad to western Switzerland in the company of the architect Adolf Loos. It was there, in January 1910, that he painted the portrait of the dancer Bessie Bruce, the well-known landscape entitled “Les Dents du Midi”, and the famous portrait of the naturalist Auguste Forel. At the Mont Blanc sanatorium in Leysin, the 23-year-old artist painted further portraits of aristocrats suffering from tuberculosis. These early works formed the basis for Kokoschka’s fame and made him a leading figure in Expressionism. Twenty years after he settled permanently in Villeneuve on Lake Geneva, Kokoschka explained in his greeting to the canton of Vaud what it was that captivated him about the region: “When I first visited Lake Geneva it was before the two World Wars, when my own homeland had not yet disappeared from the political map, and no-one who was born here would ever have thought of describing the regions in which Switzerland’s best wine grows as a paradise of legend. For me it is very much so, thanks to the starry sky above me, the ice-capped mountains before me and this endless view of the lake from the patch of grass I call my own. It has become my second home, thanks to the friendly people around me who, despite the modern migration of international tourism, hold fast to their faith that heaven is to be found on Earth and not in the beyond or the distant future” (8 April 1973). Seven years later, the painter died in hospital in Montreux aged 94, bringing to an end an extraordinarily productive life. It was the wish of the artist and his widow Olda Kokoschka, who died in 2004, that his artistic and literary estate should also find a permanent home in Switzerland.