This exhibition uses a selection of exhibits from the estate of Jeanne Hersch to paint a picture of the philosopher and her work, and her engagement with and responses to the era in which she lived. 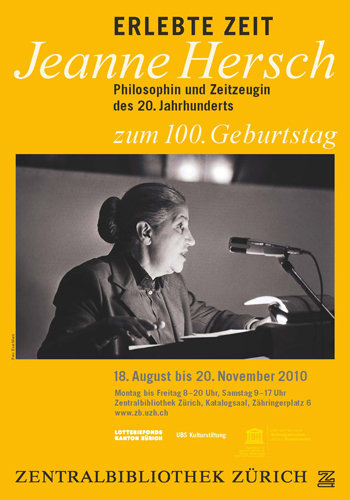 Jeanne Hersch: philosopher and witness to the 20th century

This exhibition uses a selection of exhibits from the estate of Jeanne Hirsch to paint a picture of the philosopher and her work, and her engagement with and responses to the era in which she lived.

“Time as experience” perfectly sums up Jeanne Hersch: for the philosopher, who was born in Geneva in 1910, people can only really experience their times if they live through them actively, confront them in the here and now, engage with them, and act to influence them. Jeanne Hersch remained true to that conviction right up to her death in 2000.

She sought to comprehend the developments of her era and explain them to her fellow human beings. She was famed for both her numerous philosophical writings and her socially critical commentaries, and was a fearless – and sometimes provocative – commentator on the problems of her time. Her views on issues such as the youth movements of the 1960s and 1980s had a lasting impact on the public debate. Not content merely to comment on contemporary affairs, she also attempted, via her political, social and cultural engagement, to influence them through her actions. More than almost anyone else, Jeanne Hersch seized the opportunity to experience and shape the times in which she lived.

Her estate at the Zentralbibliothek Zürich is thus a testimony to a life lived to the full. The archive boxes – more than a hundred in number – contain documents, manuscripts and photographs that reflect an entire era, covering both Hersch’s childhood in Geneva and her student years in Heidelberg and Freiburg, where she met her later teacher Karl Jaspers but also experienced the spread of National Socialism in Germany. Numerous documents attest to her teaching at the University of Geneva, her work for UNESCO, her travels, her fight for human rights, commitment to a united Europe and intellectual engagement with the ideologies that dominated the 20th century. Extensive correspondence also reveals her links to the most influential figures in politics, business and the church. Her lectures and publications also vividly illustrate how she devoted her entire output to a philosophy based on humanity, liberty and responsibility.